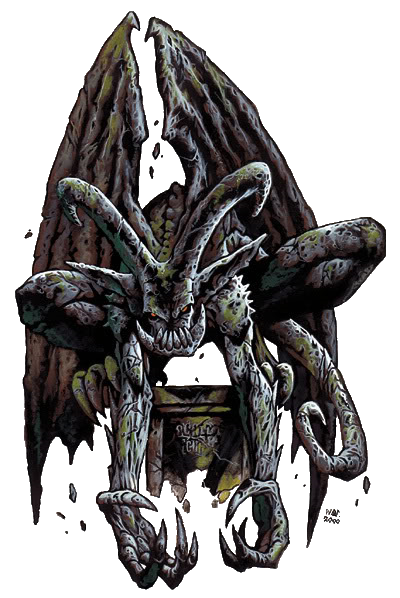 Gargoyles are monstrosities of stone hailing from the planes of Earth. These prideful predators wait in dormancy, patiently watching for enemies to inflict pain upon. A gathering of Gargoyles oftentimes will resort to banter and bragging to pass the time.

The origin of the Gargoyles, known to few even among themselves, is that they are infinitesimal shards fallen from the footsteps of Ogrémoch - raw incarnations of his evil, spawned passively by his presence. Gargoyles often serve other powerful denizens of the Earthen planes.

Speed: Subsonic (Superior to adventurers who can dodge point-blank arrows)

Standard Equipment: None, though they may wield weapons if desired

Retrieved from "https://vsbattles.fandom.com/wiki/Gargoyle_(Dungeons_and_Dragons)?oldid=5876756"
Community content is available under CC-BY-SA unless otherwise noted.