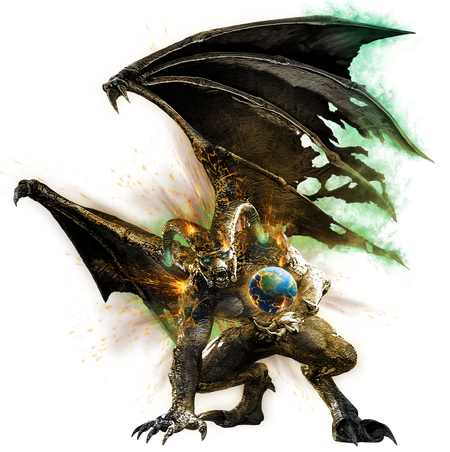 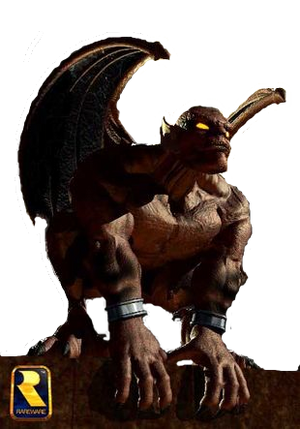 Gargos is one of the main antagonists of "Killer Instinct", ever since his debut in the second game. He is a Demonic Warlord, that was exiled 2,000 years ago after a failed invasion of Earth. Though he didn't make a physical appearance in the first game, he pretended to be a "Great Tiger Spirit" to which the Tibetan-Warrior Monks worshiped. He is strongly tied with Jago as he manipulates him into joining the Killer Instinct tournament to slay anyone who would get in the way of his plans; including Eyedol, his eternal rival. In the events of the second game, Gargos reveals his true intentions to Jago and starts his campaign of world conquest by going 2,000 years back before his previous exile.

In the reboot, Gargos's story is slightly altered. He still corrupts Jago and he is still exiled into a different dimension, but more details were added in as well (Such as stealing Tusk's memories and manipulating Kan-Ra into releasing). He's also physically different (He was just a simple Gargoyle before, but now he's a giant Baphomet Demon Lord). No matter what the timeline though, Gargos will be unleashed upon the world and begin his invasion.

Name: Gargos, the Supreme Warlord, the Ultimate Servant of Chaos... (he has many names but all of them sound equally deadly)

All previous abilities, Immortality (Types 5 and 9. As a Shadow Lord, he has a similar existence as Eyedol, who can't die like a normal human and who's true self, his soul, resides in the Astral Plane), Spaceflight, Regeneration (Low-Mid. Low-Godly over time), Portal Creation (He has mastered this ability to a point where he can combine it with most of his other abilities like Lightning Manipulation, Spatial Manipulation, Dimensional Travel, BFR and Minion Summoning), Avatar Creation (Shadow Jago is described as his avatar, being the incarnation of the fake tiger spirit in a copy of Jago's body), Body Control (Can petrify his own body), Power Absorption (Absorbed the Icherion's powers), Power Nullification (Was able to nullify Tusk's Immortality and Invulnerability, which we're bestowed by the Icherions to him in order to specifically affect Gargos), Life/Energy Absorption via Veins and Lungs of Gargos (Can drain Shadow Energy and Instinct), Self-Sustenance (Types 1 and 2), Mind Manipulation, Memory Manipulation, Corruption (Types 2 and 3. His mere presence and entrance to earth corrupted the people, the planet and nature, which remained even after his defeat and sealing and can entirely corrupt continents in a span of days), Duplication (Of himself and others), Telepathy, Telekinesis, Life Creation, Non-Physical Interaction, Soul Sealing, Statistics Amplification, Transformation (Was shown to have a different body during the end of his regeneration), Reality Warping and Subjective Reality (Can force reality to bend to his own imagination, which can affect the Astral Plane, a reality beyond our universe), Possibly Instinctive Reaction via Eyes of Gargos, Resistance to Extreme Cold and Cosmic Radiations

Lifting Strength: At least Class 5 | Class 10 (Can hold Aganos and objects of this size)

Stamina: High | Very high (Can resurrect and regain half of his health and stamina)

Standard Equipment: None | His minions

Intelligence: Gifted | Gifted (Planned for 2 millennium on how to escape exile and immediately conquered earth)

Gargos and the boys.

Gargos finishes his regeneration process and wakes up to a new day for world domination.
Add a photo to this gallery