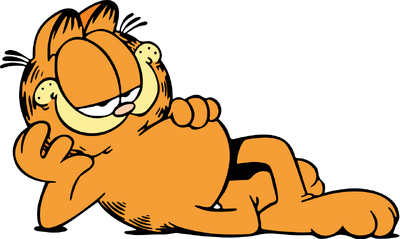 Garfield is the protagonist of the newspaper comic of the same name. He is a fat orange cat, spending his day sleeping, eating, kicking the dog and being bored.

Powers and Abilities: Superhuman Physical Characteristics, Superhuman Digestion (Ate an entire TV and was completely fine), Hair Manipulation, Flight, Toon Force, Fourth Wall Breaking, Hammerspace, Retractable Claws, Surface Scaling (Able to stay on ceilings, walls and other objects with claws), Regeneration (At least High-Mid. Regenerated from an explosion that blew him up), Non-Physical Interaction (Able to touch ghosts. Held the ghost of a wrapped-up newspaper and used it against the ghost of a spider he swatted), Temporal BFR or Limited Time Manipulation (Kicked Odie into the next week), Can talk and listen to innanimate objects, Sound Manipulation (His belches can create soundwaves and they were strong enough to activate car alarms from several miles away), Telepathy (Could read people's minds), Mind Manipulation (Can manipulate other's thoughts), Transformation (During Halloween, Garfield transformed into a Mr. Hyde version of himself), Dream Manipulation (Can make his own Nightmare Monsters haunt other people), Vehicular Mastery (Skilled in driving go-karts), Duplication, Time Stop (Can freeze time within the click of a button on the Time Watch)

Attack Potency: At least Wall level (Ripped off a large tree off the ground and carried it around. Threw a large boulder several meters into the air), likely higher (Slammed a window so hard that he ended up destroying an entire house)

Speed: At least Supersonic (Can reach speeds faster than sound)

Durability: At least Wall level, likely higher (Can survive his own blows). Toon Force and regeneration make him difficult to kill.

Stamina: Incredibly high (Although he can be lazy, he has stayed up for several days straight without any issues. Can still go on even after receiving several burns and wounds all over his body)

Intelligence: Above Average (Smarter than most of the other people in the series. Can read notes and books unlike other animals, and can also drive go-karts well. Is skilled in being a detective, as well as rapping, speaking Spanish, and playing several musical instruments. Is fully aware that he's a fictional character and has immense knowledge on pop culture. Can manipulate his foes with ease. Has performed several complex plans on his own, such as robbing a bank)