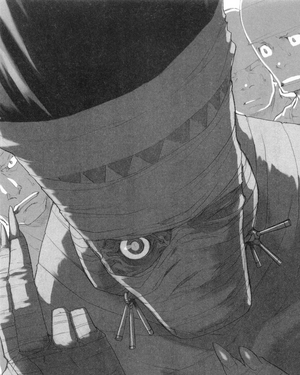 Garde Ritzberg, also known as "The Black Gravekeeper" is an officer of The Organization. It has lived for so long that it no longer remembers its own gender. Garde has some of the most formidable subjugation abilities in the series and as a result it is considered to be one of the most powerful vampires in the world.

Name: Garde Ritzberg, also known as The Black Gravekeeper and Garde the Black

Age: Unknown, said to have wandered battlefields for centuries in search of corpses to assume command over.

Attack Potency: At least Small Building level (As one of the most powerful vampires of The Organization, it should be far superior to any ordinary human physically. It should also be capable of feats like these. Caldimir claimed that a fight between Garde and Zygmunt would end Europe. In fact according to Gerhardt, Garde can easily overpower Zygmunt's endless armies. Loa, even after she had taken hold of Relic von Waldstein's power, was absolutely terrified of fighting Garde. Can ignore durability with its powers).