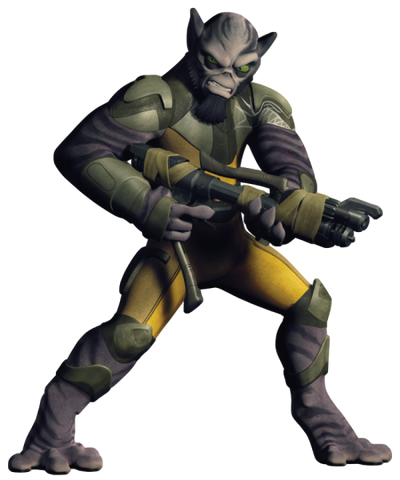 Garazeb Orrelios, often simply referred to as "Zeb", was Captain of the Lasan High Honour Guard during the final years of the Galactic Republic and during the rise of the Galactic Empire. After the Fall of Lasan and near decimation of his race, he would go on to become a member of a Lothal cell of rebels known as The Ghost Crew. He and the rest of the cell would later flee Lothal and join the larger galaxy-wide rebellion against the Galactic Empire. During his time in the rebellion, he would develop a fierce but honourable rivalry with Imperial Security Bureau agent Kallus.

Tier: 9-A physically. 9-A with blasters. High 8-C with heavy weapons and explosives

Attack Potency: Small Building level physically (Lasat are stated to be comparable in size and strength to Wookiees. Being the former commanding officer of Lasan's most elite military unit, Zeb is one of the greatest warriors among his species and should scale to the likes of Chewbacca and Black Krrsantan. This is proven by the fact that he can fight evenly against a large adult male Trandoshan, who are known to be capable of contending with Wookiees in hand to hand combat). Small Building level with blasters (Military issue blaster carbines can be this powerful. Zeb's AB-75 bo-rifle in blaster configuration is at least as powerful per shot if not more so). Large Building level+ with heavy weapons and explosives

Lifting Strength: Possibly Class 5 (Scaling from Chewbacca and Black Krrsantan. Lasat are stated to be as strong as Wookiees)

Speed: Superhuman (Can blitz a small squad of a handful of Stormtroopers. Has proven himself so fast in combat that shooters a few metres from him find it difficult to react to him in time and get off a proper shot)

Durability: Small Building level (Should be at least as durable as Kallus. Capable of taking multiple blows from a large adult male Trandoshan. This means he should be about as durable as the likes of Chewbacca)

Standard Equipment: His AB-75 bo-rfile, will make use of grenades and other explosives on missions that require them.

Intelligence: Above average. Despite his immature behaviour, it should be noted that he is a skilled & cunning warrior and he used to be the commanding officer of his homeworld's most elite military unit.

Weaknesses: Short tempered and immature. Has some holdover trauma from the Fall of Lasan.