Garouden (餓狼伝, Garōden, THE LEGEND OF THE HUNGRY WOLF) is a series of Japanese martial arts novels by Baku Yumemakura that have been published for 36 years with the latest being released in 2018. The first part being 13 volumes and the second part is 4 so far. They have been adapted as a manga by Keisuke Itagaki (of Baki the Grappler fame), and two video games. The two video games are Garōden Breakblow, released November 17, 2005 and Garōden Breakblow Fist or Twist, released March 15, 2007, both for the PlayStation 2.

The story so far is that fighting expert Bunshichi Tanba enjoys defeating TV fighting champions and celebrities on the street until he stumbles into the underground wrestling club known as the Federation of Amateur Wrestling. Unfortunately he's defeated by a wrestling world underdog and forces himself to improve before seeks his rematch.

Years later he returns better than ever and his fights attract the attention of the two "monsters" of the fighting world that are constantly in competition with each other, Makoto "The Great" Tatsumi, owner of the FAW and with a power and charisma unrivaled in the ring, and "The Demon of Karate" Matsuo Shozan, owner of the best Karate schools in Japan and with a power and speed that's almost godlike. Both try to recruit Tanba to their own side and Tanba will experience a fighting world like he has never seen, with friends and rivals everywhere.

Garouden isn't too powerful a verse with characters mostly sticking in the Street level to Small Building level range and reaching Subsonic to Supersonic speeds. 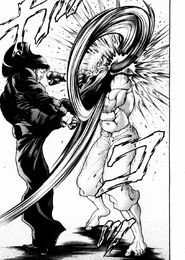 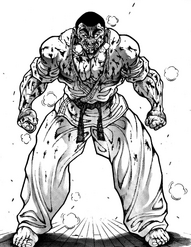 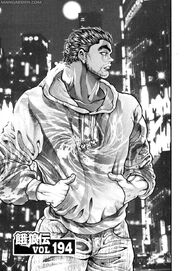 Bunshichi Tanba
Add a photo to this gallery

Retrieved from "https://vsbattles.fandom.com/wiki/Gar%C5%8Dden?oldid=6107411"
Community content is available under CC-BY-SA unless otherwise noted.