Gantz is a manga series written and illustrated by Hiroya Oku. Gantz tells the story of Kei Kurono and Masaru Kato, both of whom died in a train accident and become part of a semi-posthumous "game" in which they and several other recently deceased people are forced to hunt down and kill aliens armed with a handful of futuristic items, equipment, and weaponry. Both the manga and anime are noted for their heavy violence and sexual content.

Humans in the verse vary from Normal Human level to Wall level, being able to increase their power to Building level with the Gantz Suit, as well as having Large Building level weapons. The God Tiers of the verse, The Aliens of the Truth, stand at Unknown. 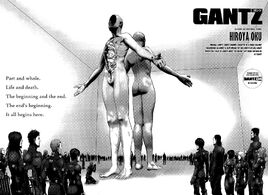 Aliens Of The Truth

Sakurai Hiroto
Add a photo to this gallery