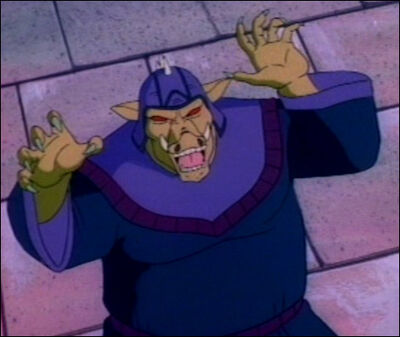 Superhuman Physical Characteristics, Magic, Teleportation, Levitation, Auto-Resurrection (If he or his minions are ever killed, they are instantly resurrected inside the Evil Jar), Transmutation (Turned a bird into a bat, turned a lizard into a giant dragon), Can instantly immobilize someone by creating chains around them, Heat Manipulation, Fire Manipulation, Summoning, Power Modification (Messes with Spirte's magic itself , making it where her own spells attacks her. ), Resurrection Negation (Can permenantly kill his moblins to the point where they do not return to the Evil Jar.), Telekinesis (Moved his cloth ), Necromancy (Created undead soldiers), Life Manipulation (Created a bird), Corruption/Unholy Manipulation (Turned the bird into a minion of his), Clairvoyance (Could see what Link was doing all the way back from his base), Illusion Creation (Can create an illusionary form, that transforms the person into a frog if they kiss it), Surface Scaling (Ganon was capable of standing on the wall), Inorganic Physiology(Type 1. Ganon like his minions is a being made of magic), Summoning, Sealing, & Homing Attack (Can summon your evil half who will trap you in the mirror and he can throw this mirror from kilometers away and it will home in on you), BFR (Can teleport someone unwillingly)

Magnetism Manipulation(Sunk the entirety of North Castle with a magnet), Mind Manipulation (Controlled Zelda with a pendant), Power Nullification (Can trap someone in a bubble, which is completely indestructible to all forms of magic from the outside and the inside, even making enemies incapable of teleporting out of it), Existence Erasure & Resistance Negation (Ganon could erase Link and send him to his evil jar despite him being resistant to the beams)

Existence Erasure (It takes 3 shots for Link to erase Ganon)

Attack Potency: Wall level physically (Superior to the Tinsuits, who can smash heavy stone walls just by falling over). At least Building level+ with spells (Turned a lizard into a giant dragon as a distraction, accidentally killed Gohma with a single fire attack, created a glass vase so strong that Link and Zelda together couldn’t break it, Can magically immobilize even Link, created a bomb that ended up oneshotting him and 4 of his minions, created a spell that he thought killed Link, inadvertently caved in his evil lair)

Speed: Subsonic+ with Supersonic reactions (Has fought and reacted to Link’s attacks on multiple occasions, has dodged so many of Link’s Kris Sword blasts on one occasion that Link commented that he looked like he was dancing)

Durability: Wall level (Can survive more than one laser from the Kris Sword. The Kris Sword is Link’s strongest weapon, and even without it he could perform Wall Level feats, can also survive his own magic),

Stamina: Likely high (He has often fought Link for extended periods of time)

Standard Equipment: The Triforce of Power

Intelligence: Genius (Ganon is an expert trickster who has been a thorn in Link and Zelda’s side for years and has devised dangerous plans; He also outsmarted a magic bubble that was made to specifically counter his magic and force him down a bottomless pit. He is a tactical genius and is shown that without his help, the Moblins can't even storm Hyrule even with all of them together.)

Weaknesses: His teleportation powers are limited in the upper world.