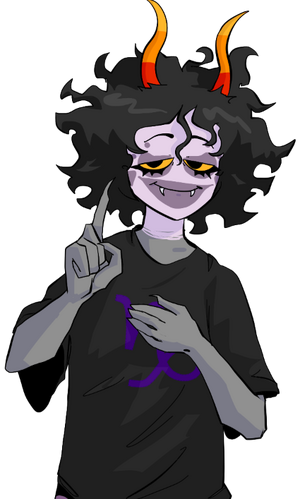 Powers and Abilities: Superhuman Physical Characteristics, Weapon Mastery, Hammerspace, Acausality (Type 1; He's a Paradox Clone, meaning he was created by copying himself from a different point in time), limited Cosmic and Fourth Wall Awareness, Afterimage Creation, Pseudo-Elasticity, Fear Manipulation (Chucklevoodos allows someone to manipulate fear, being able to manipulate someone or making them weaker), Mind Manipulation, Dream Manipulation (Can induce nightmares and manipulate the dreams of others, creating a clown doll in John's, directly leading to the creation of Bec Noir), Rage Power (As a rage player he gets stronger the angrier he gets), Time Travel with Aradia's Timetable, Regeneration (At least Low-Mid) Immortality (Type 8) and Plot Manipulation (Gamzee possesses plot armor which makes him unable to die until he fulfills his role. He also can't die in general because of "being a clown", which is confirmed by WoG to be a literal form of "Joker Immunity"), Longevity (All trolls with green blood or above in the Hemospectrum live more than 100 years.), Berserk Mode (Via going into a rage state), Resistance to Psychic Attack (All mid and high blood can resist Gl'bgolyb's voice as long as it is not raised to the level of scream.), Mind Control (Trolls with a blood higher than Teal are immune to Vriska's mind control), Poison Manipulation, Acid Manipulation (Stelsa, a troll of lower blood, was able to whistand the acid rain of Alternia) and Precognition | Same as before with Resistance to Pain Manipulation

Attack Potency: At least Mountain level (Was able to harm and kill Equius, however Equius was being passive because of his superiority complex and chucklevoodos. Easily broke Nepeta's wrist and killed her.) | At least Mountain level, likely far higher (Way stronger than before, his blow against the Black King was considered as the strongest one, maybe even stronger than Vriska's Ancestral Awakening).

Speed: FTL+ (Despite Gamzee being in the room and constantly moving around, Karkat was completely oblivious to his presence.) | At least FTL+

Stamina: Immensely high | Possibly inexhaustible as long as he has enough rage

Intelligence: Nearly impossible to properly define, however Andrew stated that most of the mistakes of the characters during his murders were because of him using his powers on them.

Weaknesses: Gamzee eats sopor slime pie to keep himself sedated. If he runs out, his instincts take over and his true nature breaks through. When this happens, he becomes a sadistic, murderous zealot who only offers his true loyalty to Lord English, and by extension, Caliborn.

A sedated Gamzee shows off his mad unicycle skills.

Gamzee's God Tier duds. He made 'em, himself.

Gamzee proceeding to flip the hell out.

Homestuck Vol. 7 - The Carnival
Add a photo to this gallery