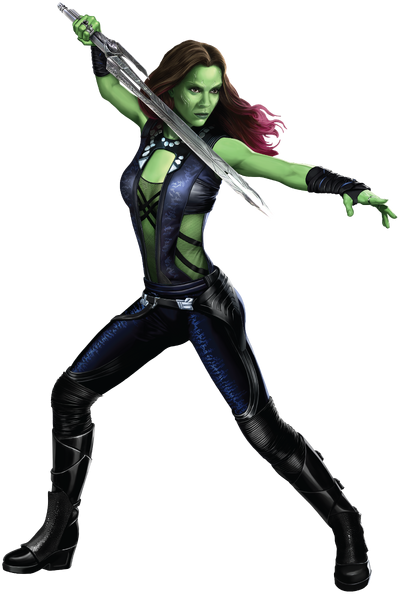 Gamora is a former assassin and a member of the Guardians of the Galaxy. She became the adopted daughter of Thanos after he killed half of her entire race. She served him for years before betraying him in an attempt to free herself from his ways. She was hired to steal the Orb, and became caught up in the quest for the Orb, becoming friends with the other members of the Guardians of the Galaxy. After the Battle of Xandar, she left to work with them.

Name: Gamora, the Most Dangerous Woman in the Galaxy

Age: At least 25 Zehoberi years at the time of her death

Speed: Superhuman movement speed (Leapt a large distance) with Massively Hypersonic combat speed and reactions (Can fight on par with Star-Lord, should be faster than Groot)

Lifting Strength: Class 5 (Carried a spaceship cannon that's more than twice her size and used it as a weapon. Comparable to Nebula, who can snap necks)

Intelligence: Likely above average with high combat knowledge. Gamora has earned a feared reputation as the "deadliest woman in the galaxy" due to her work as an assassin while under the tutelage of Thanos. Under Thanos' wing, Gamora received extensive training in both armed and unarmed combat. Gamora was able to throw a knife with such accuracy that she caused Quill to drop the Orb from his hand while he was running away from her without amputating him. She is also a skillful swordfighter.