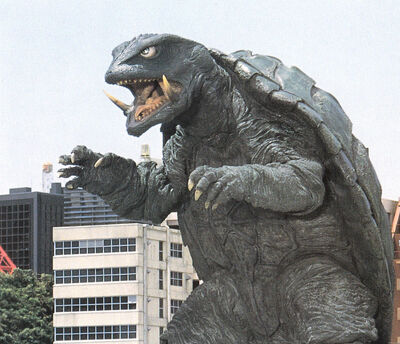 Many millennia ago, an ancient advanced civilization known as Atlantis found a way to play God and created life, called the Gyaos, soon though, they got out of control, somehow being able to asexually reproduce themselves. To stop this, the Atlanteans created another creature, none other than Gamera, who had managed to defeat the Gyaos, however it was too late as the Gyaos had already destroyed Atlantis in the process. Gamera realized that before defeating them all, some of them had layed eggs, but the earth's mana was too great for them to hatch, knowing that they would one day, Gamera went into hiberation, until it happened.

In the present day, because of the rising levels of carbon dioxide and nitric acid compounds caused by global warming, the Gyaos eggs hatched, since it was now the right environment for them. Gamera then had awoken to defend the modern day civilization and the planet from his nemesis, the Gyaos and any other threats.

Powers and Abilities: Superhuman Physical Characteristics, Large Size (Type 1, ranges from 35 to 80 meters depending on film), Regeneration (Mid-Low in combat, Low-Mid overtime; can regrow his limbs if allowed enough time), Flight, Spaceflight, Acrobatics (Despite his large size, he is very athletic), Natural Weaponry (Shell, Teeth, Tusks, Claws), Self-Sustenance (Type 1, can survive in space), Underwater Breathing (Type 2, In Gamera vs Zigra, he was shown to be able to walk around the ocean floor for an extended period of time), Pyrokinesis, Mana Manipulation, Absorption (Can absorb mana and various materials such as fire, heat, nuclear fuel, electricity, and oil and use it to restore his stamina, heal his wounds, and enhance the power of his fire and plasma attacks), Adaptation (He can adapt to various things to become stronger, eventually adapted and strengthened his skin to the point that the sonic beam of a Hyper Gyaos, far stronger than the Super Gyaos who'd cut him before, reflected harmlessly off of his skin), Accelerated Development (Can become much stronger overtime, gets stronger with each movie within a shared continuity), Telepathy (Can establish telepathic bonds with humans), Extrasensory Perception (Can sense when children are in danger), Explosion Manipulation, Body Control (Can pull his head and limbs inside his body and use his shell to protect himself), Immortality (Type 1), Resurrection, Resistance to freezing (although, it used to be his main weakness, by the end of Gamera vs. Viras, he was seemingly unaffected by it)

Attack Potency: At least Large Mountain level (Amputated his own hand via a Plasma Fireball, Plasma Fireballs can be fired repeatedly), likely higher (Plasma Fist is at least twice as strong, Suicide and Mana Beam, which destroyed Legion, are likely even stronger)

Speed: Hypersonic in atmosphere. At least Sub-Relativistic in space (Scaling from a spaceship traveling to a planet on the opposite side of the Sun, and Gamera making the same trip) and combat speed/reflexes

Durability: At least Large Mountain level (Survived a Legion Flower point blank that destroyed Sendai even with Gamera attempting to block the explosion, but had to go into a coma-like state, he was fine and more powerful in the next movie. He was also unharmed by an atomic bomb and a collision with an asteroid.)

Stamina: Very High (fought with Irys for a prolonged period of time.)

Range: Tens of meters due to size. At least several hundred meters with fireballs.

Weaknesses: Gamera is immobile while using the Mana Beam. His underbelly is a weak spot. He was originally vulnerable to cold temperatures. Some enemies have exploited Gamera's allegiance to children to gain leverage against him or lure him into a trap by kidnapping or threatening children.