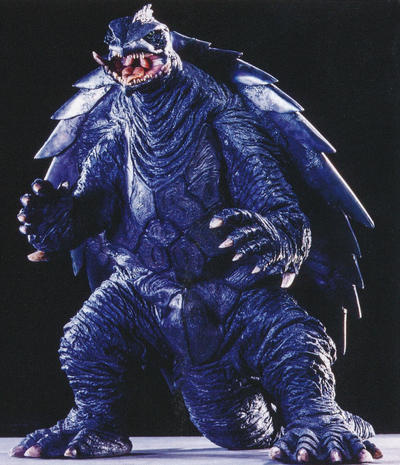 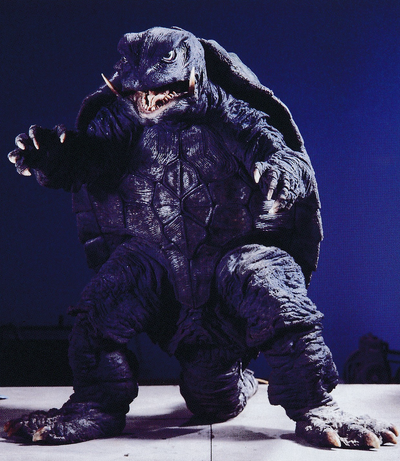 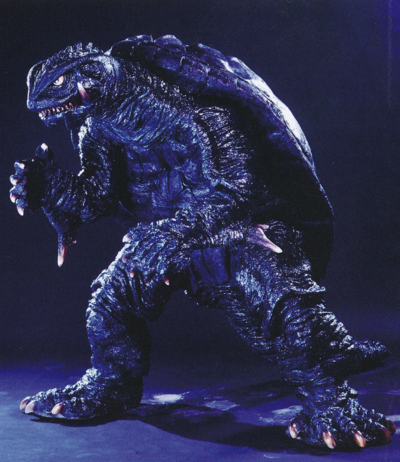 Gamera (ガメラ) is a guardian kaiju that first appeared in the 1995 Daiei film, Gamera: Guardian of the Universe.

Gamera was created by the ancient civilization of Atlantis thousands of years ago to combat their previous creation, Gyaos. Gamera wiped out most of the Gyaos, but Atlantis was destroyed in the battle. Gamera was sealed within an atoll and remained dormant until 1995 when three Gyaos appeared in the skies over Japan. Gamera awakened from his long sleep and traveled to Japan to destroy his ancient enemy. Gamera killed two of the Gyaos, but the JSDF interfered with his attempts to destroy the last one, which grew into the larger Super Gyaos. With the help of his human ally Asagi Kusanagi, with whom he was telepathically bonded, Gamera fought Super Gyaos in Tokyo and successfully killed it. The following year, Gamera returned to Japan to fend off Legion, a species of extraterrestrial creatures that threatened all life on Earth. Gamera destroyed the Legion's symbiotic propagation device, a giant flower, but the Mother Legion relocated her kind to Sendai. Gamera tried to reach the new flower, but the Mother Legion badly wounded him before fleeing. The flower seeded, producing a catastrophic explosion that seemingly killed Gamera. Using energy he absorbed from the Earth itself, Gamera came back to life and fought the Legion once again, destroying them once and for all. By 1999, evolved Gyaos called Hyper Gyaos began appearing in huge numbers all over the world, pushing Gamera to the brink of his strength. Additionally, a young woman named Ayana Hirasaka, who blamed Gamera for the deaths of her parents in 1995, found and raised a strange demonic creature she found in a shrine and named Iris to take revenge on Gamera for her. The JSDF had become fed up with the destruction Gamera caused in his crusade against Gyaos and turned against him. When Iris reached maturity and traveled to Kyoto, Gamera followed it there and battled it. Gamera was able to kill Iris and free Ayana from its evil influence but was badly maimed in the battle. However, with thousands of Hyper Gyaos descending upon the city, Gamera was ready to continue his eternal struggle with his ancient foe, knowing humanity was by his side once again.

Powers and Abilities: Superhuman Physical Characteristics, Large Size (Type 1), Immortality (Type 1), Regeneration (Mid-Low in combat, Low-Mid overtime; can regrow his limbs if allowed enough time), Flight, Spaceflight, Natural Weaponry (Shell, Teeth, Tusks, Claws), Self-Sustenance (Type 1, can survive in space), Underwater Breathing (Type 2), Pyrokinesis, Mana Manipulation, Absorption (Can absorb mana and various materials such as fire, heat, nuclear fuel, electricity, and oil and use it to restore his stamina, heal his wounds, and enhance the power of his fire and plasma attacks), Adaptation (He can adapt to various things to become stronger, eventually adapted and strengthened his skin to the point that the sonic beam of a Hyper Gyaos, far stronger than the Super Gyaos who'd cut him before, reflected harmlessly off of his skin), Accelerated Development (Can become much stronger overtime, gets stronger with each movie within a shared continuity), Telepathy (Can establish telepathic bonds with humans), Explosion Manipulation, Body Control (Can pull his head and limbs inside his body and use his shell to protect himself)

Attack Potency: At least Large Mountain level (Amputated his hand via a Plasma Fireball, Plasma Fireballs can be fired repeatedly), likely higher (Plasma Fist is at least twice as strong, Suicide and Ultimate Plasma, which destroyed Legion, are likely even stronger)

Durability: At least Large Mountain level (Survived a Legion Flower from point blank range that destroyed Sendai even though Gamera had attempted to block the explosion. He was fine and became more powerful in the next movie)

Stamina: Very High (Fought with Irys for a prolonged period of time)

Range: Tens of meters due to size. At least several hundred meters with fireballs

Weaknesses: Gamera is immobile while using the Ultimate Plasma. His underbelly is a weak spot.

Retrieved from "https://vsbattles.fandom.com/wiki/Gamera_(Heisei)?oldid=5818111"
Community content is available under CC-BY-SA unless otherwise noted.