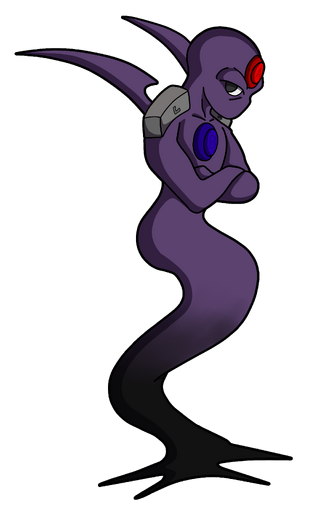 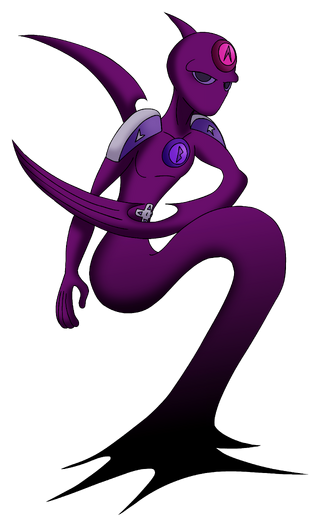 Gamecrazed, often referred to as "GC," is one of the five members of the Dandy Alliance on TOME, of the Morphological class with the power of shadow. He is a very quiet character, avoiding conversation whenever possible. He is closest to Nylocke out of all the other main characters. It was revealed in the season 2 finale that GC was the "shadow" of SOFDTI, the artificial intelligence that TOME ran on. His screen name was actually the password to the door which protects the room in which SOFDTI sleeps deep within TOME.

Powers and Abilities: Superhuman Physical Characteristics, Weapon Mastery, Shapeshifting, Flight, Darkness Manipulation, Absorption via the Drain Edge, Size Manipulation, Technology Manipulation, Limited Creation (Revised and improved Bitshrum's additions to TOME), Mind Reading (Shown when SOFTDI read Kizuna and Zetto's emotions by "getting inside their heads" and when he saw through Rubirules' motives), Telepathy, Regeneration (High-Mid, Was tore to be nothing but splatters by Tigerlily and recovered), Empathic Manipulation (As the creator of the Forbidden Power, SOFTDI's own negative emotions can be transferred to another person through the Forbidden Power's possession. SOFTDI's code can transform negative human emotion into actual pain through the TOME game), Sealing & Chain Manipulation (Shown when SOFTDI sealed Kajet), Avatar Creation

Speed: Relativistic reaction, travel and combat speed (Moved in tandem with a beam of light)

Range: Standard melee range, several meters with projectiles and shapshifting, Infinite with emotional and technological powers (Accidental Creator of the Forbidden Power, who's powers transcend past the TOME video game)

Standard Equipment: Drain Edge – Can absorb kinetic energy and use it against the opponent

Notable Attacks/Techniques: Gamecrazed can fade in and out of the ground as a shadow, fly, morph his body, shoot shadow projectiles and more.

Retrieved from "https://vsbattles.fandom.com/wiki/Gamecrazed?oldid=6600623"
Community content is available under CC-BY-SA unless otherwise noted.