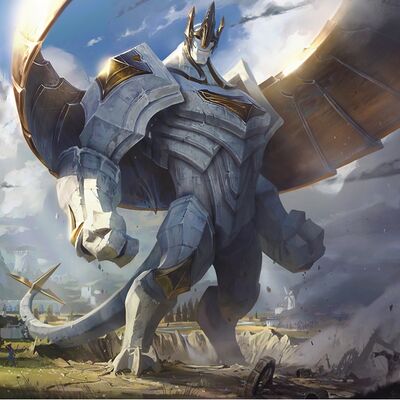 Outside the gleaming city of Demacia, the stone colossus Galio keeps vigilant watch. Built as a bulwark against enemy mages, he often stands motionless for decades until the presence of powerful magic stirs him to life. Once activated, Galio makes the most of his time, savoring the thrill of a fight and the rare honor of defending his countrymen. But his triumphs are always bittersweet, for the magic he destroys is also his source of re-animation, and each victory leaves him dormant once again.

A black-hearted monstrosity leading the hellish Infernal hordes, Galio is titanic even by the standards of his fiery kin. His steps melt the very bedrock beneath him, swallowing entire armies without so much as a second thought.

Attack Potency: Town level (Should be much stronger than the likes of Garen, Xin Zhao, and Quinn. Fought against Sion when the latter was still alive.), Small Country level against Magic (Able to nullify magic comparable in power to that of a World Rune) | Mountain level (Comparable to Volcanic Wukong, Firefang Warwick, Infernal Nasus, Infernal Akali, and Infernal Varus. When the Ashen Lord was first summoned, the Infernals ripped great mountains from their foundations.)

Lifting Strength: Class K (His size alone warrants this as he weighs 300 tons, should be far superior to the likes of Garen and Poppy) | Class T (Capable of lifting mountains)

Range: Several meters due to size, Hundreds of meters with spells | Several kilometers

Weaknesses: Galio is only capable of functioning and moving while magic is in the area, if there is none he will go into dormancy and be unable to take any form of action.