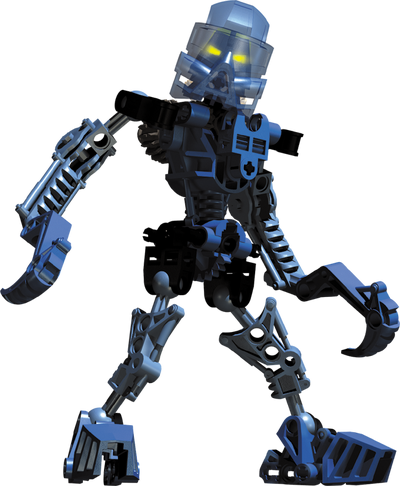 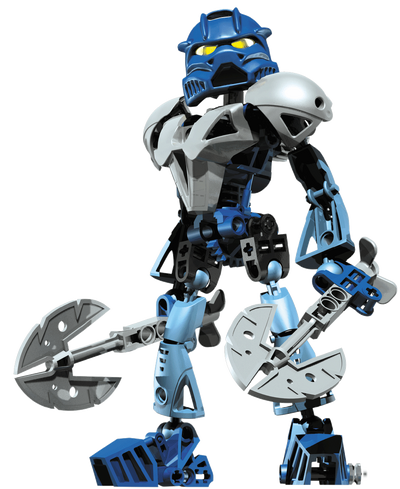 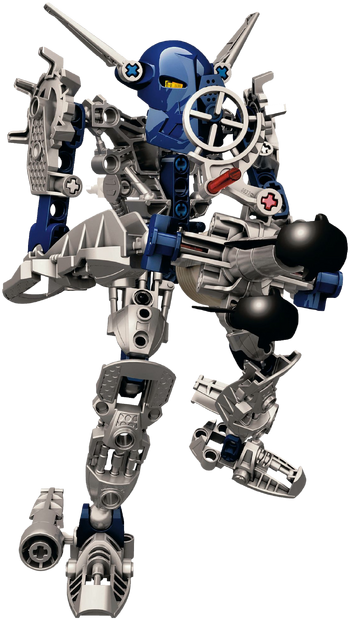 Toa Gali is one of the Toa Mata, the first Toa team, and the team destined to awaken Mata Nui from his great slumber. She later transformed alongside the rest of the Toa Mata, into the Toa Nuva. Gali is gentle, wise, and kind, and is often the one to attempt to quell her teammates' fights.

Powers and Abilities: Superhuman Physical Characteristics, Water Manipulation and Absorption, Healing, Fusionism (Can fuse with other Toa of different elements), Limited Telepathy (Can form mental links with other beings and share the things they see), Sealing (By combining her element with the different elements of five other Toa at once, Gali can encase an opponent in a cage of Protodermis), Water Breathing with Kaukau, Forcefield Creation with Hau, Flight with Miru, Intangibility with Kakama Nuva, Statistics Amplification (Can boost her speed with Kakama and her strength with Pakari), X-Ray Vision with Akaku, Invisibility with Huna, Translation with Rau, Illusion Creation and Shapeshifting with Mahiki, Mind Manipulation with Komau, Telekinesis with Matatu, Reactive Evolution with Adaptive Armor (It can adapt to give Gali the ability to fly or survive in space, and can change her weapons to better exploit an opponent's weaknesses), Energy Manipulation with Nynrah Ghost Blaster, Resistance to Illusions with Akaku Nuva, Longevity, Regeneration (High-Low; Toa can regenerate the biological portions of their body and reattach lost limbs)

Attack Potency: City level+ (Shouldn't be much weaker than she is as a Toa Nuva, as other Toa aren't that much weaker than them), Island level with Nova Blast (Far superior to her normal attacks and capable of leveling Metru Nui) | City level+ (Comparable to Pohatu, who reduced Odina Fortress to dust), Island level with Nova Blast

Speed: Massively Hypersonic+ (Alongside the rest of the Toa Mata, fought the Avohkah, lightning-based Rahi that possess the properties of lightning and were mistaken for lightning bolts), possibly Relativistic (The Toa Inika could react to and dodge Umbra in his light form) | Massively Hypersonic+ (Comparable in speed to her previous form, and can fight Rahkshi and Makuta who can manipulate electricity and electrical fields), possibly Relativistic

Stamina: Extremely high. The Toa Mangai were capable of fighting against the Kanohi Dragon for an entire month.

Standard Equipment: As a Toa Mata, she wielded a pair of Hooks, and as a Toa Nuva, she wielded dual Aqua Axes, which double as swimming fins.

Weaknesses: Gali is weakened without her Kanohi. Using a Nova Blast drains her powers and leaves her incapable of using her elemental powers for a few days.

Toa of Water: Gali is a Toa of Water, giving her the ability to control water. She can draw water from the moisture in her surroundings, even the air, and can absorb it as well. She can cause whirlpools and tidal waves. This power can also be used to heal. While in the Matoran Universe, "water" is actually Liquid Protodermis, Gali can also manipulate actual water with concentration. As a Toa Nuva, she could even create timed blasts of water.