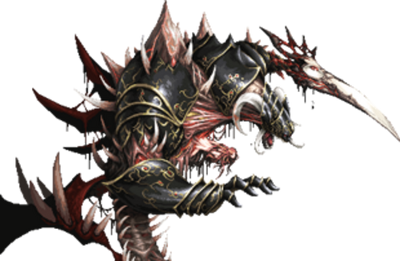 Galdera, also known as God of the Accursed Flame was the most powerful of the thirteen gods that created the world of Orsterra. He serves as the true final boss of Octopath Traveler after all 8 protagonists cleared their chapters as well as prerequisite side quests. Long ago, Galdera waged war against the other twelve gods and overwhelmed them, but was sealed away by Aelfric's flame into the Gate of Finis due to his betrayal. Legends, including The Far Reaches of Hell tome and the Ruins of Eld, say he will drown the entire world with a great flood and consume all who live whether it be mortals and Gods alike. His daughter Lyblac sets out on a journey to set him free, which leads all eight protagonists to him.

Name: Galdera the Fallen, God of the Accursed Flame

Gender: Assumed to be Male

Classification: The Fallen God, the Endbringer of destruction

Attack Potency: At least Multi-Continent level (Is consistently stated to be capable of destroying the entire world; the Ruins of Eld further elaborates by mentioning that he will drown all of Orsterra in a great flood that washes away all life)

Speed: At least Subsonic (Can easily keep up with the endgame party, who should be far superior to Heathcote)

Durability: At least Multi-Continent level (Took countless hits from the 8 protagonists to be defeated. Even the other twelve gods, who "shaped the mountains and filled the seas" were unable to kill him)

Range: Planetary (Will cover the entire world's surface with his wrath upon awakening)

Intelligence: At least Genius. Was said to be the wisest and most powerful of the thirteen gods, has been around for eons and possesses vast knowledge over all known laws of the land. Was more than a match for the other twelve gods and can see nearly all things with the Omniscient eye.

Weaknesses: With all his great power and knowledge, Galdera is also prideful and believes himself to be flawless; thus causing him to overestimate his own power. He does have weaknesses to various elemental attacks and weapons; though, those weak points can be altered or changed. Will be weakened and unable to use invulnerable barriers when some of his other parts are destroyed.