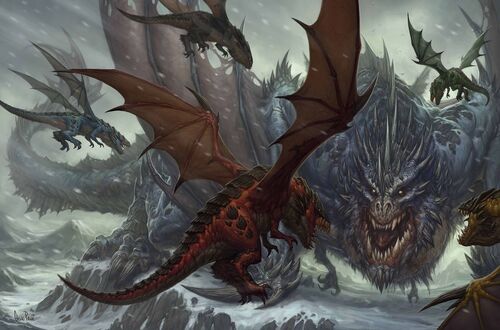 Galakrond was the largest and mightiest of all proto-dragons on Azeroth, and likely the progenitor of all dragonkind, who had dominated most of the northern lands of Kalimdor. However, he was compelled by an insatiable hunger, and eventually turned to feast on other proto-dragons. As he continued to devour dragons, his mind and body became warped with a necrotic affliction, and he began to terrorize the the skies of Kalimdor with his minions. It is through his warring with the five of the mightiest proto-dragons and Tyr, that they were ordained as the five Dragon Aspects.

Name: Galakrond, The Nightmare, The Unspeakable, The Wretched, Father of all Dragons, Progenitor of Dragonkind

Powers and Abilities: Superhuman Physical Characteristics, Flight, Enhanced Senses, Large Size (Is the largest proto-dragon to have ever soared the skies of Azeroth, dwarfing the size of all five Dragon Aspects combined), Necromancy (Death energies that emanate off of his hide will animate dead matter), Energy Manipulation, Elemental Manipulation (Proto-dragons are descended from the elements), Mind Manipulation, Summoning

Attack Potency: At least Large Country level (Could match the combined strength of Tyr and five other of the strongest proto-dragons simultaneously. Thus he should be far stronger than Neltharion), likely higher (If he were to remain unchecked, he would have devoured all nature and spread his affliction across all of Azeroth)

Speed: Unknown (Should be comparable to the five Dragon Aspects)

Stamina: Extremely high. Could sustain years of fighting with thousands of other dragons at once.

Range: Kilometers. The beating of his wings alone could flatten entire forests.

Intelligence: Unknown. Noted to be rather mentally unstable.

Weaknesses: Vulnerable to attacks directed at his eyes.

Galakrond, the Nightmare in Hearthstone

Galakrond, the Unspeakable in Hearthstone

Galakrond, the Wretched in Hearthstone
Add a photo to this gallery

Retrieved from "https://vsbattles.fandom.com/wiki/Galakrond?oldid=5496156"
Community content is available under CC-BY-SA unless otherwise noted.