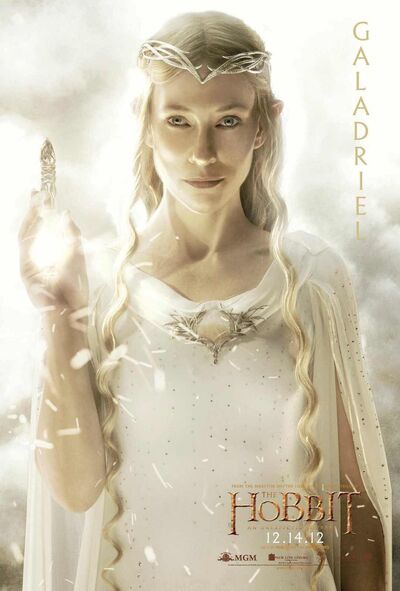 Galadriel is the Lady of Lothlórien and a mystical figure in The Lord of the Rings, the fantasy novel by J.R.R. Tolkien. She is a friend to the wizard Gandalf and aids the hobbit Frodo in his quest to destroy the one ring of power. She was played by Cate Blanchett in Peter Jackson's Lord of the Rings and The Hobbit film trilogies.

Galadriel was the co-ruler and Lady of Lothlórien along with her husband, Lord Celeborn. Neither she nor Celeborn took royal titles as they saw themselves as guardians of Lothlorien.

She was the only daughter and youngest child of Finarfin, prince of the Ñoldor and of Eärwen, whose cousin was Lúthien. Her elder brothers were Finrod Felagund, Angrod and Aegnor. Galadriel was a niece of Fëanor, one of the most important elves of the First Age.

She was one of the greatest of the Eldar in Middle-earth, and surpassed nearly all others in beauty, knowledge, and power. She was also the bearer of Nenya, one of the three Elven rings. Tolkien thought of her, along with Gil-galad the Elven-king, as one of the mightiest and fairest of all the Elves left in Middle-earth.

Tier: At least 6-B, possibly higher with Nenya

Powers and Abilities: Superhuman Physical Characteristics, Weather Manipulation (Can alter the weather within her domain, create fog and storms), Telepathy (Even Sauron couldn't dominate her mind without the Ring), Telekinesis (Destroyed a massive fort), Magic, limited Precognition/Clairvoyance and Clairvoyance with the Mirror of Galadriel (Can see possible futures), her ring is invisible, her body may have retained traces of the same divine light Fëanor captured in the Silmarils, can hold off the effects of decay in her domain with Nenya

Attack Potency: At least Country level, possibly higher with Nenya (The power of Nenya was so strong that only Sauron himself could breach it)

Range: Melee range. Several kilometers with magic (Destroyed a city-sized fort). At least several hundred kilometers with weather manipulation (Able to control the environment within her territory). Country level/continental telepathic resistance (Sauron's attacks from Barad-Dur, a place on the opposite side of the continent, were unable to break her mental defenses despite trying constantly during the war)

Standard Equipment: Nenya, one of the Rings of Power.

Intelligence: Genius (Skilled in magic, having learned from Melian, a Maia. A skilled tactician)