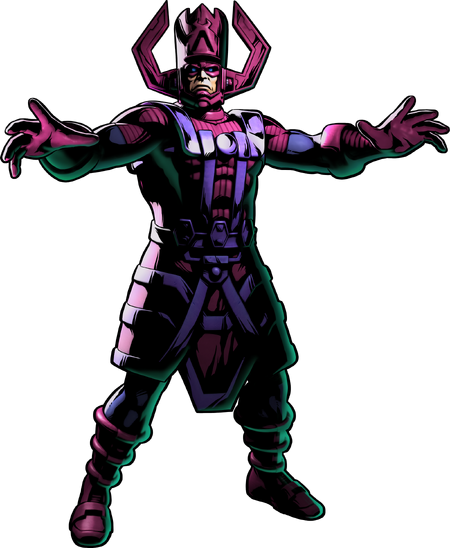 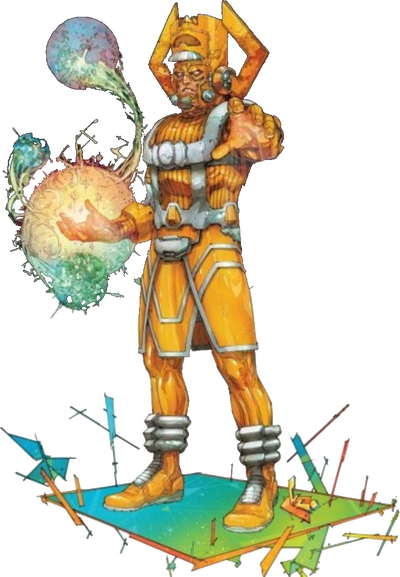 Galactus was originally an explorer named Galan from a planet called "Taa" in a universe that existed before the big bang. When the impending cataclysm gradually killed all life in his universe, including almost all of his own people, he and other survivors sought to escape the decay of their world. They left Taa via a space vessel, but it was eventually engulfed in the cataclysm that ended the old universe and spawned a new one. Galan, however, did not die, but was transformed by the Sentience of the Universe, and gestated for billions of years, emerging (partially due to the inactivity of a Watcher) into the new universe as Galactus.

Name: Galactus, The Eater of Worlds, formerly known as Galan | The Lifebringer, The Seeder of Worlds

Age: Predates the current Universe, though now technically beyond time

Superhuman Physical Characteristics, Non-Corporeal, Acausality (Type 1. Unaffected by his own actions bending time and affecting the past), Immortality (Types 1, 3, 4 and 8), Regeneration (Low-Godly. Not even Death can claim Galactus, and Galactus is capable of regenerating from complete physical annihilation), Reality Warping (Stated by Reed that his mere presence can alter reality), Spatial Manipulation (Galactus' mere presence bends and reshapes the fabric of space around him), Time Manipulation (Galactus' existence bends time, influencing the past, present and future simultaneously), Energy Manipulation (Has complete control over energy, be it physical, cosmic, spiritual, magical, or mental), Matter Manipulation (Can manipulate matter on a sub-atomic level, able to convert physical beings into many things such as an insect or even as pure energy. Made the electrons in the flames of the Human Torch contract), Physics Manipulation (Can bend, alter, and defy the known laws of physics), Perception Manipulation (As Galactus has no true form, every being perceives him the best way their limited mind can comprehend), Soul Manipulation/Empathic Manipulation (Can erase all emotion from one's soul, making them completely subservient to his will), Mind Manipulation (Possesses telepathic powers which rival, if not completely surpass that of a Skyfather such as Odin), Memory Manipulation (Can erase memories with a gesture or touch), Illusions (Can create powerful illusions even when being light-years away from his target. Created a functional illusion of the entire planet of Zenn-La), Absorption (Can convert entire planets and stars into Cosmic Energy to devour them. Can absorb all forms of energy. Can devour souls), Telepathy (Works across light-years), Teleportation (Can teleport himself or others across light-years, or even alternate realities), Telekinesis (Can move even Solar-System sized constructs, or entire galaxies), Shapeshifting & Size-shifting (Can alter his shape at will, shrink to minuscule scale, or grow to the size of a Galaxy), Forcefield Creation, Gravity Manipulation (Can manipulate gravity to such an extent that he can halt, and revert the gravitational flow of a black hole), Antimatter & Dark Matter Manipulation (Through tech), Healing, Power Nullification (Can strip people of their powers), Paralysis Inducement (As shown here), Cosmic Awareness (Can sense when the universe is about to get in danger, can perceive individual atoms across the universe, hear the falling of single leaves on planets lightyears away, can feel every thought and every emotion in the souls of entire populations, is able to perceive Thanos even when the Titan used the Infinity Gauntlet to conceal himself), Exists in and can attack his enemies in countless layers of existence (Physical, mental, spiritual, astral, abstract, etc.), Body Puppetry (Controlled Gamora without manipulating her mind), Summoning (Summoned the punisher to battle lesser beings for him), BFR (As shown here), Existence Erasure (Through the Ultimate Nullifier), Resistance to Mind Manipulation (The combined telepathic power of Professor Xavier and Magneto does nothing to Galactus), Matter Manipulation (Not made of matter, nor anything tangible), Soul Manipulation/Empathic Manipulation (Lacks a Soul/Heart), Possesses all the abilities of the Silver Surfer on a vastly higher scale

Attack Potency: Solar System level (Significantly more powerful than the likes of Silver Surfer and Thor. Fought The Sentry to a standstill) | Low Multiverse level (Fought against, and proved himself superior to Odin) | Multiverse level+ (His battle with Scrier and the Other threatened to destroy all universes. Killed a Mad Celestial) | Low Outerverse level (He is an inner function of Eternity and was formed from the heart of the Sixth Multiverse, being technically a brother to Eternity. Is powered by a cosmic wellspring that is theoretically as infinite as the current Multiverse. Was capable of perceiving infinite timelines simultaneously, and even that was a fraction of his true perception, as he was able to perceive all of Eternity at once)

Lifting Strength: At least Pre-Stellar (Scaling from his Heralds) | Variable, up to Galactic via sheer size (Grew to the size of a galaxy) | Immeasurable | Immeasurable

Weaknesses: Galactus needs to feed on planets to sustain himself. If he goes for more than a month without eating a planet, he will grow weak and eventually die | None notable

Note 3: In one Marvel story, an infinity of alternate realities was stated to be created at every quantum moment, each of which then gives birth to additional more infinities and so onwards.