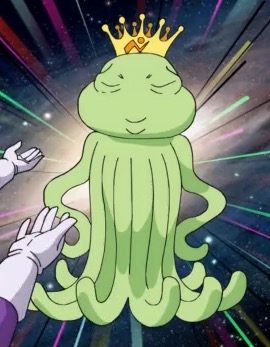 The Galactic King (銀河王, Gingaō) is the king of the North Galaxy. While there are others who claim ownership of the galaxy such as the tyrant Frieza, this king could be considered the official king of the North Galaxy as he tries to keep order and protect everyone with the Galactic Patrol working under him. (Link). It is said he and his whole patrol force were casually defeated by Frieza, which made the tyrant a taboo subject.

Speed: Relativistic (Said to be much faster and powerful than any of the other members of the Galactic Patrol, which includes Jaco)