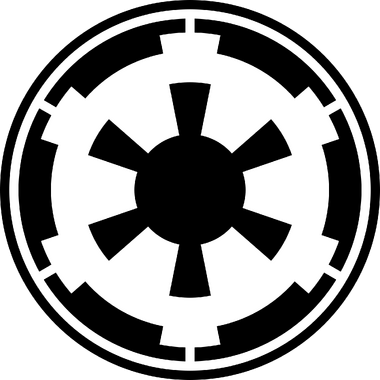 The Galactic Empire was officially instated by Emperor Sheev Palpatine after the execution of Order 66 and the virtual eradication of the Jedi Order. Extending across the galaxy, it maintained order through brutal tactics and overwhelming force, but its vice-like grip over the countless worlds contained within it loosened as the Emperor's policies eventually incited rebellion, being officially dissolved after Palpatine's death at the Battle of Endor along with the destruction of the Death Star II. However, many of its loyalists and remnants survived, seeking to continue the Emperor's will even after his demise.

Age: 23 before their fragmentation in the Battle of Endor. Their splinter groups survived long enough to reach 159.

Technology/Abilities: Holo-Net transceivers that allow for real-time communication from across the galaxy, blasters powerful enough to fragment solid rock, all-terrain ground vehicles capable of releasing up to kilotons of energy, multi-kilometer long starships with hyperspace technology that allows travel across the galaxy in hours or days and are equipped with shields that can take direct hits from light turbolasers, heavy turbolasers release many gigatons of energy per shot, while light turbolasers release dozens of megatons of energy per shot (A Star Destroyer carries more than a hundred light turbolasers and dozens of heavy turbolasers), ion cannons that can disable the power systems and shields of other capital ships, jamming technology employed in all fighters that can disrupt onboard sensors in enemy ships, subspace transceivers with 100 light year range that can detect objects moving at superluminal speed, most starships are equipped with cloaking devices that render the ship invisible to scanners and the naked eye, crystal gravfield trap sensors that can detect cloaked ships, planetary shields that can withstand weeks of sustained fleet bombardment from heavy turbolasers (In addition, Alderaan's planetary shield blocked the Death Star’s superlaser for a split-second), advanced engineering facilities are focused on the task of developing and refining more efficient, more durable, and more deadly methods of destroying or subjugating enemies, the twin Death Stars that have the power to violently fragment planets, Orbital Nightcloaks (Satellites that can block all sunlight from reaching a planet and turn it into a chunk of ice), World Devastators (Multi-billion km3 ships that drag planetary matter into furnaces to break it down into its base elements, armed with multiple blaster cannons, proton torpedo tubes, ion cannons and tractor-beam projectors), the Galaxy Gun (A superweapon that can fire planet busting projectiles through hyperspace to the other side of the galaxy in hours), the Sun Crusher (A starship-sized superweapon that can make stars go nova)

Attack Potency: Small Building level to Large Building level+ with various weapons (Military grade heavy blaster pistols and rifles employed by the Imperial military are capable of such levels on their highest power setting. Thermal Detonators have yields of roughly 8 tons of TNT and Disruptors rifles can take down an AT-DP with a single shot) | Building level+ to Town level+ (The blaster cannons on the AT-ST unleash five gigajoules per shot on the highest power setting. The AT-DP's shots can reduce building-sized rocks to rubble and destroy other AT-DPs. An AT-AT's heavy laser cannons are at least as powerful as those on an X-wing. The Imperial Army also has access to artillery whose shots are powerful enough to level mountainsides) | Town level+ to Large Mountain level (A burst of fire from a TIE Fighter's laser cannons can take down starships as durable as the Maxillipede shuttle and Kom'rk-class Fighter, cluster bombs on the TIE Bomber and the TIE Advanced can cripple an AT-AT, their concussion missiles and proton torpedoes are more powerful than the missiles used in the Clone Wars era Umbaran long range capital defence turrets, which have yields of 100 Megatons each, and potentially up to 800 Petajoules. A barrage of such missiles/torpedoes can severely damage the unshielded hulls of capital ships and orbital stations with at least this level of durability) | Town level+ to Large Island level (Imperial navy patrol boats, such as the Gozanti-class Cruiser, are equipped with laser cannons which can outright one-shot a fully shielded V-wing Starfighter. The point defense laser cannons on an ISD have yields exceeding six megatons and can quickly deplete the shields of craft capable of withstanding tractor forces powerful enough to rip apart entire cities. Their medium turbolasers can penetrate the hulls of ships with gigaton level durability, while their heavy turbolasers exceed 200 gigatons per hot on the highest power setting and can cause violent tectonic spasms when bombarding planetary surfaces) | Multi-Continent level (The superlaser of the Conqueror can shatter dwarf planetoids, flatten continents and "demolish" a planet's crust. The Eclipse and the Sovereign come equipped with similar superlasers) to Large Planet level (The superlaser of the Death Star generated this much energy when destroying Alderaan) to Solar System level (The Sun Crusher is capable of causing stars to go supernova and wipe out entire star systems)

Industrial Capacity: Capable of producing tens of thousands of Star Destroyers in a few decades, as well as both Death Stars in five years. Their best and brightest are constantly at work at developing new and more superior technology.

Weaknesses: As a whole, the Empire is incredibly speciesist, refusing to allow all but the very most competent non-humans obtain high positions

Note: This page covers the Galactic Empire as seen in the Legends continuity, and does not account for their various splinter factions.

Gem Homeworld (Steven Universe) Gem Homeworld's Profile (Weapons higher than tier High 6-A were forbidden, the Diamonds and the force users were sitting out, and speed is equalized)