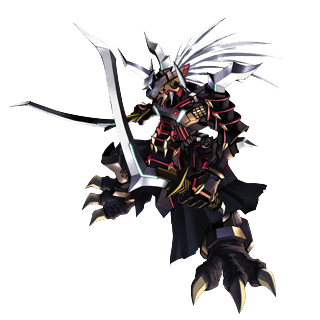 Gaiomon is a Dragon Man Digimon that increases its own strength as it wins battles, and is a subspecies of the Greymon-species, which are highly capable as Combat Species Digimon. Discovered within a neglected Oriental computer, there are many parts of its strength which are unmeasured, but it has been confirmed that it possesses an unbelievable combat record from its countless battles. Its uniquely shaped "Kikurin" swords, which it acquired due to its combat experience, leave behind eerie tracks of light, and it is said that anything that comes in contact with those tracks will be cut to pieces.

In Digimon World Dawn/Dusk Gaiomon is a member of "Kowloon Co." and thus works for GranDracmon.

Gender: Genderless, but regarded as Male.

Classification: Mega level, Dragon type Digimon, One of the 3 Gods of Destruction

Powers and Abilities: Superhuman Physical Characteristics, Digimon Physiology, Swordsmanship, Energy Manipulation, Dual Wielding, Light Manipulation, Limited Probability Manipulation, Status Effect Inducement, Life Draining, Status Effect Inducement, Resistance to Death Manipulation and Existence Erasure, Illusion Creation, Teleportation, Summoning, Shapeshifting, Telekinesis, Telepathy, Mind Control, Transmutation, Phasing, can absorb data, can become more powerful by absorbing data, Data Manipulation, Darkness Manipulation, Can purify evil souls and cancel out their will to fight, Can force opponents to listen to his orders, Explosion Manipulation, Ice Manipulation, Sleep Manipulation, Hellfire Manipulation and Conceptual Erasure with Dark Fire (The Flames of Hell/Dark Area aka El Evangelo are purifying flames that erase those who are burnt by them. This goes so far as to being able to erase even the Seven Great Demon Lords and erase one beyond death in which in Digimon death means nothingness. Whether the flames erase one beyond nothingness is dependent on whether they are evil or not. If evil, the one who is erased will be erased beyond nothingness), Death Manipulation, Water Manipulation, Resistance to Existence Erasure (Those with the X-Antibody can resist multiple levels of Program X/Particle Worm which is a mass erasure technique from Yggdrasil) and Power Nullification (Can resist the effects of Particle Worm in which also negates all the abilities of those effected).

Attack Potency: Galaxy level (Can detonate all of the energy in the atmosphere with "Gaia Reactor". Stated to have an unbelievable combat record with countless victories and should be at least comparable to WarGreymon) | Low Complex Multiverse level (Is the second in command of "Kowloon Co." and so he shouldn't be too far behind GranDracmon. Fought Koh and Sayo on near equal grounds. Fights as one of Sayo's Digimon in Super XROS Wars)

Speed: Relativistic+ with FTL combat speed (Scaling to other high tier members of the Greymon family) | Immeasurable (Equal to other members of Kowloon Co. Fought by GranDracmons side in Super XROS Wars)

Durability: Galaxy level (Can be assumed to have fought enemies who rivaled his strength) | Low Complex Multiverse level (Tanked its from Koh/Sayo)

Standard Equipment: His "Kikurin swords", which can fuse into one.

Intelligence: Expert swordsmen and fighter who has an unbelievably high combat record of countless victories.

Weaknesses: Can be out-ranged due to being primarily a melee fighter, otherwise none notable.