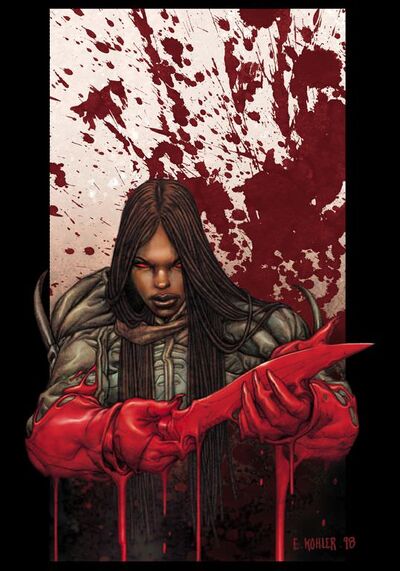 Gabriella (last name unknown) is a supporting character from the Blood franchise, briefly appearing in the first game before returning to play a more major role in Blood II: The Chosen. Formerly a man named Gabriel, she was groomed into warriorhood since she was a child, and her past is deeply rooted in ritual, tradition, and war. This harsh upbringing instilled within her an insatiable lust for violence and killing, a trait which proved invaluable to her ascension through the ranks of the Cabal and eventual initiation as a member of Tchernobog's elite Chosen.

Gabriella's change in gender came in Blood II when she was resurrected and summoned through a portal created by the game's Singularity Generator. Her only explanation when Caleb acknowledged and questioned this change was "it's a long story".

Powers and Abilities: Superhuman Physical Characteristics, Weapon Mastery, Immortality (Type 1 and 7), Healing (Mid-Low with Med-Kits, as well as by consuming the hearts of humans), Statistics Amplification (via Wards and the Life Seed), natural Resistance to Soul Manipulation (Scaling from Caleb)

Attack Potency: Multi-City Block level physically (Stronger than Ophelia and Ishmael. Should be comparable if not superior to the Beasts who were meant to serve as new members of the Chosen. Implied to have fought and killed numerous creatures from the Ancient One's reality, which most likely included several Behemoths), higher with weapons

Speed: Supersonic combat speed and reactions (Capable of reacting to and dodging Tesla Cannon projectiles which, at the very least, should travel at this speed. Able to land hits on enemies who can also react to such projectiles. Somewhat slower than Caleb)

Lifting Strength: At least Class 1 (Can carry a minigun almost as tall as she is with only one hand. Should be at least somewhat comparable to Caleb)

Durability: Multi-City Block level physically (Can take hits from the Naga. Superior to Ophelia and Ishmael), higher with Wards and the Life Seed

Intelligence: Above average. Skilled in combat, especially in the field of firearms and explosives, though her tactics are generally straightforward and decidedly bereft of nuance.

Weaknesses: Lacks subtlety or stealth, relying on brute force and firepower during fights. Her weapons and armor drastically reduce her mobility.

Note 1: As Gabriella was not a playable character in the first game, her abilities and equipment are limited to what she has been shown possessing in the second installment.

Note 2: The pieces of story information found on the Blood II website state that she is "easily the strongest of the Chosen", which would almost certainly include Caleb. However, the games themselves have depicted her as being vastly weaker than the latter, with him defeating her in combat as well as killing a fair number of enemies who should logically be superior to her in terms of power and physicality. As such, the statement on the Blood II website should be ignored in regards to her scaling in relation to him.

Retrieved from "https://vsbattles.fandom.com/wiki/Gabriella_(Blood)?oldid=4216235"
Community content is available under CC-BY-SA unless otherwise noted.