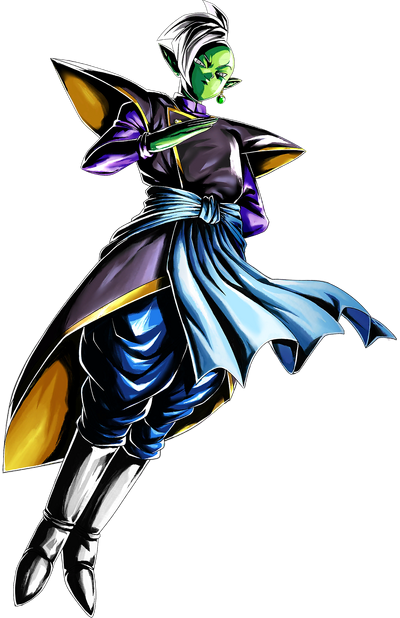 Future Zamasu (ザマス) used to be the Supreme Kai apprentice of Universe 10, but took over the position after Gowasu was killed.

This is the version of Zamasu from Future Trunks' timeline. For the one from the regular Dragon Ball timeline, see Goku Black.

Powers and Abilities: Superhuman Physical Characteristics, Acrobatics, Master in Martial Arts, Flight, Spaceflight, Self-Sustenance (Types 1 and 2), Ki Manipulation (Can be used defensively and offensively, to strengthen his skin or to fire ki blasts, which can home in on targets, and form defensive barriers), Ki Sensing (Can locate others by reading their ki), Enhanced Senses, Shockwaves Generation, Telepathy, Telekinesis, Teleportation, Dimensional Travel, BFR, Magic, Creation, Regeneration (Mid-High; as an immortal, should be superior to Cell and Buu), Immortality (Types 1, 2 and 3), Pain Inhibition (As a result of his immortality, he feels no pain, even when being impaled), Possibly Sound Manipulation and Portal Creation (Any character equal to or stronger than Buu Saga top tiers can perform the Vice Shout with sheer power), Fusionism (Via Potara Earrings), Resistance to Extreme Cold and Cosmic Radiations

Striking Strength: Universal (Could hurt Goku with his strikes)

Durability: Universe level (Was completely undamaged by a Kamehameha from Super Saiyan Rosé Goku Black. Able to withstand blows from Goku in his SSJB form)

Intelligence: He is a genius fighter, should be rather intelligent in general due to his status as a unofficial Supreme Kai (Essentially an overseer of the universe)