Future Mai is an alternate universe version of the Dragon Ball character Mai who resides within Future Trunks' timeline. Like her counterpart, Mai's age was drastically decreased by Shenron after Pilaf messes up their wish. However, this Mai is turned into a baby and gets separated from The Pilaf Gang, thus growing up to be far more compassionate and caring than the self-centered and scheming her from the main timeline. She is always putting the well being of others above her own and willing to die in order to ensure the safety of those around her. When Goku Black goes on his purge of justice, annihilating most of humanity, Mai forms a resistance group of soldiers to combat him. Mai shares a very close and personal connection with her fellow comrade Trunks, whom she cares deeply for and protects on multiple occasions.

Classification: Human, Leader of the rebellion against Goku Black

Speed: Peak Human (Is the swiftest human soldier in her group). Superhuman on her motor scooter

Striking Strength: Street Class (She's much stronger than everyone within the resistance besides Trunks and Yajirobe)

Durability: Wall level (Survived her rocket launchers exploding back in her face point black with little pain. Got hit by an extremely casual attack from Goku Black which sent her tens of meters in the air and created a gigantic explosion but only lost consciousness with no serious injury)

Intelligence: Expert tactician, strategist and fighter. Has extraordinary leadership skills. She is also extremely skilled at shooting, with her aim amazing highly trained soldiers and being able to make headshots from very far distances.

Weaknesses: Always willing to throw her life away to protect others.

Mai offering her last food can to Trunks

Mai fighting in the Opening Credits

Mai seemingly defeated by the blast 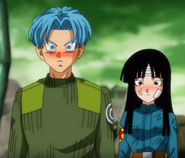 Mai giving Trunks her energy
Add a photo to this gallery