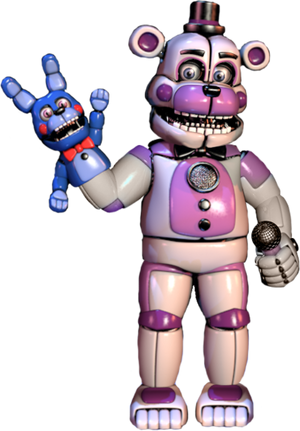 Funtime Freddy is one of the seven animatronics (twelve if the Custom Night animatronics are counted) in Five Nights at Freddy's: Sister Location. He is a "funtime" version of Freddy Fazbear, who once again is the titular antagonist, if not the main one.

Funtime Freddy's design is very similar to Withered Freddy with a metal suit, blue eyes, thinner eyebrows, wearing a top hat with a purple stripe (similar to Toy Freddy's hat), black bowtie, and two black buttons on his chest, as well as a set of human-like teeth. He is a white/purple bear animatronic, far different from his counterparts. The light-purple color is featured on his stomach, shoulders, elbows, knees, insides of his ears, cheeks, eye-sockets, a stripe from his top hat, thighs, knuckles from his left hand, and the top areas from both feet. His left hand has five fingers and holds a microphone with a purple handle. He does not have a right hand, his right arm ending instead in Bon-Bon like a hand-puppet. Like Funtime Foxy, he sports a circular speaker located under his bowtie.

Attack Potency: Wall level (Could overpower or kill the player. Should be comparable to Circus Baby)

Speed: Superhuman (Comparable to other animatronics)

Durability: Wall level (Should be comparable to other Funtime animatronics, such as Circus Baby)

Stamina: Extremely high, due to being a robot

Weaknesses: Funtime Freddy can often be deluded, believing in anything someone tells him if he is not completely sure