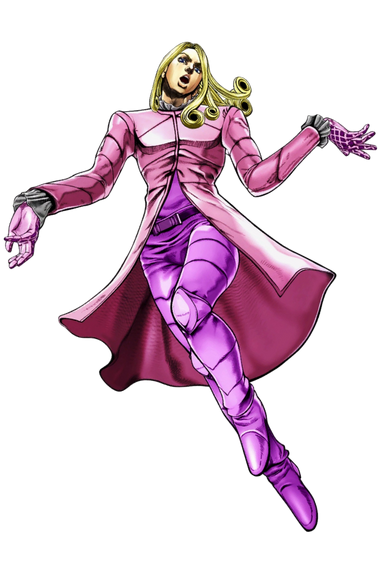 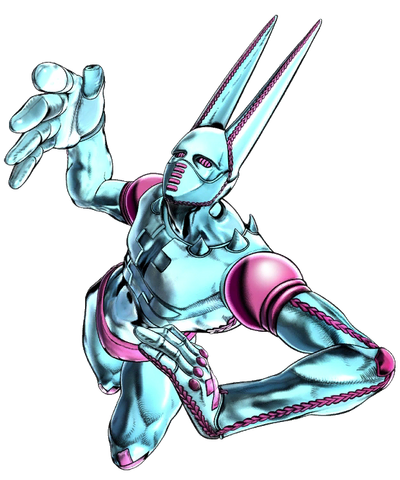 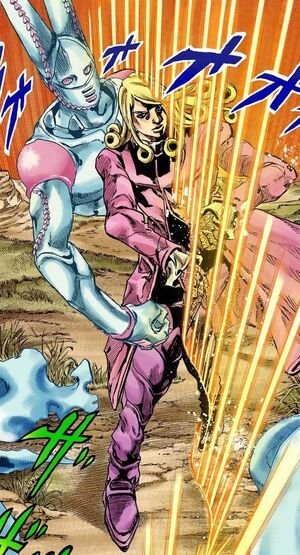 Funny Valentine is the 23rd President of the United States, an avowed patriot who seeks to make his country supreme above all others. To this end, he organizes the country-wide Steel Ball Run race, with a grand prize of $50,000,000, seeking to use it as a front to collect all nine portions of the Holy Corpse scattered across America.

Superhuman Physical Characteristics, Extrasensory Perception (Capable of seeing ghosts and souls among some other supernatural forces that are normally otherwise invisible), Expert Marksman (He's a good shot with his pistol, shooting Axl in the neck and intentionally missing his vitals), Social Influencing (Resourceful at making promises in order to keep situations under his control. Is noted to be charming and held a 91% approval rating as President), Stealth Mastery (When using D4C's abilities), Aura and Summoning (Of his Stand. The latter two powers are only present in the Valentine with D4C, the rest of the powers are shared by all alternative versions of himself)

Superhuman Physical Characteristics, Afterimage Creation (Its attacks can leave numerous afterimages), Flight (Within its effective range), Invisibility (A Stand can only be seen by other Stand users), Non-Corporeal, Non-Physical Interaction (Stands can interact with ghosts and other Stands), Selective Intangibility, Dimensional Travel and Portal Creation (Valentine can use D4C to travel between infinite & "neighbors"/similar dimensions), BFR (Valentine can use D4C to transport others, even just parts of their body and projectiles), Limited Possession and Immortality (Type 6; He can transfer his Stand and his memories to an alternate version of himself if he is lethally injured), Pseudo-Summoning (Using D4C, Valentine can manually bring his alternate selves for help in combat, or other allies, such as Diego Brando from Another Universe), Pseudo-Transmutation (By causing someone to come near an alternate version of themself, both will collapse into Menger Sponges and be completely obliterated; this is not an ability of D4C, but a simple fact of the world, and Valentine himself is immune), Pseudo-Intangibility (Valentine can use his dimensional doors to phase through objects and other beings) and Aura

All previous abilities minus the Corpse Parts, Flight (He can fly using Love Train), Probability Manipulation (Love Train directs attacks/misfortune elsewhere in the Earth, leaving only good fortune behind), Absorption, Annihilation & BFR (Love Train draws in its surroundings and transports them elsewhere as part of its misfortune-deflecting effects, things that are drawn in are annihilated and vanish from the world), Transmutation (Turns things that make contact with Love Train into misfortune itself and sends it elsewhere), Biological Manipulation (Love Train can move injuries to other parts of a target's body to make even scratches lethal strikes) Spatial Manipulation (His ability works by entering a flat gap in space created by the union of the Corpse Parts), Body Control (Can flatten himself against the ground and move through Love Train), Fusionism (Love Train can draw objects into others and fuse them), Valentine took a Cream Starter from an alternate Hot Pants, which has Biological Manipulation and can be used to spray flesh as a projectile and use it in a number of ways) on top of Healing

Stamina: High, capable of briefly surviving fatal injuries such as having his hands nearly cut off, his throat slit and even being gutted and split down the middle.

Standard Equipment: His Stand (D4C), his father's handkerchief, a revolver, and some of the Holy Corpse parts | His previous equipment minus the Holy Corpse parts, in addition to Love Train, Lucy Steel (She's around a dozen meters away from Valentine unwillingly granting him his new powers, which will be eventually unneeded), and a Cream Starter.

Intelligence: Valentine is a cunning strategist and opponent willing to do anything it takes to win, cleverly making use of his Stand's abilities to evade death and overcome his foes. He is a careful and observant man who constantly works towards his goals and to grasp his own capabilities. This cautious nature allowed him to grasp that the Spin posed a threat to him, and to see through Diego's disguise.

Weaknesses: Valentine must be between two objects to use D4C's ability to travel between worlds, and any damage D4C takes will be reflected onto his own body. Funny Valentine can not move 1890's American currency between dimensions, although this is later contradicted. | Valentine must maintain a certain distance from Lucy to use Love Train, and must move alongside Lucy if she changes location. To attack others and change the location of their injuries, D4C must leave the safety of the dimensional wall, becoming briefly vulnerable.

- Dirty Deeds Done Dirt Cheap: Valentine's Stand, known as D4C for short. It is a blue-and-pink close-range Stand with large, bunny-like ears. As a close-range Stand, it attacks at short ranges with punches, but its primary ability is to allow multiple parallel universes to exist in the same place at once, with its own universe acting as the "root" universe. As a result, this universe is the only one with Corpse Parts. 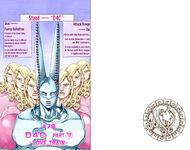 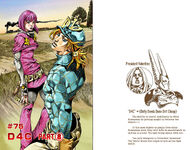 Love Train's description
Add a photo to this gallery

Valentine in All Star Battle