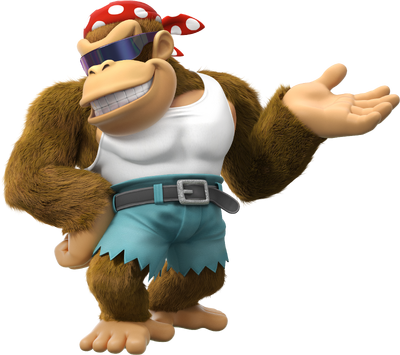 Funky Kong is a member of the Kong Family and a recurring character in the Donkey Kong series. His first appearance was in the first Donkey Kong Country game and appeared since then as a mechanic that built a lot of important objects in order to help the Kongs in their adventure. In Tropical Freeze, he appears as the owner of the item shop and a playable character.

Attack Potency: Likely Country level (Is the one that delivered the final blow to King K. Rool in Donkey Kong 64, knocking him through the ceiling of his arena and onto K. Lumsy's Prison, able to likely defeat Lord Fredrik)

Speed: Massively Hypersonic (Rescued the Kongs at the end of the GBA version of Donkey Kong Country 2, should be comparable to Donkey Kong)

Standard Equipment: His surfboard and a yellow pair of goggles with a snorkel.

Intelligence: Gifted (Is more intelligent than the other Kongs due to him being able to idealize and create useful inventions for travel such as the Funky Barrel, Biplane Barrel and the Gyrocopter or for other means like weapons/accessories) 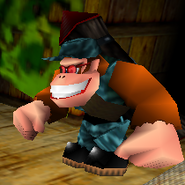 DKC64 Funky Kong.
Add a photo to this gallery