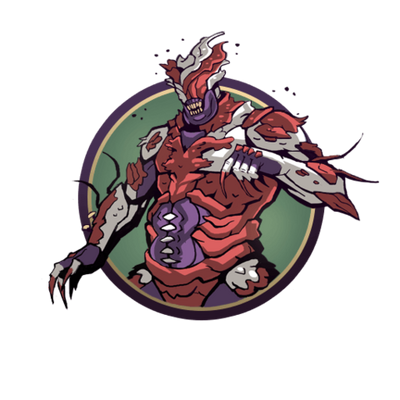 Fungus is the third Eternal encountered in the Underworld, the multiplayer mode of Shadow Fight 2. He is one of the four bosses of the first floor of the Underworld, along with his brothers: Volcano, Megalith and Vortex. He makes his first appearance very early during the main events of Shadow Fight 2 when he gets awakened from his slumber by the Shadow Energy released to the world by Shadow, who opened the Gates of Shadows. He claims that humanity has poisoned the land and that it neraly killed his mushrooms, which is one of the reasons why he wants to cleanse the earth by absorbing the mind of every human with his mushrooms. Shadow challenges him to a fight in order to stop him from destroying the earth. The hero wins the duel and weakens the god in the process. Later on, after Shadow defeated Titan and destroyed the Gates of Shadows, he was tasked with defending one of his sister's magical artifacts, that were able to control destiny and fate. He represents the concept of diseases, and is one of Tenebris' creations.

Tier: Unknown, at most High 6-A

Age: Unknown, likely as old as the universe

Powers and Abilities: Superhuman Physical Characteristics, Magic as Plant Manipulation; Mind Manipulation with Absorption through Fungus Manipulation (His mushrooms can absorb humanity's minds), likely Disease Manipulation and Poison Manipulation, Non-Physical Interaction (Can interact and fight against Shadow, who lacks a body), Immortality (Types 1, 3 and 8), Abstract Existence (Type 2, is the embodiment of the concept of diseases), Non-Corporeal, Regeneration (Presumably Mid-Godly - embodies the concept of diseases, and diseases themselves must be destroyed to truly kill him, Sensei states that he would sill come back to life after getting killed, as any life form does), Weapon Mastery, Martial Arts, Acrobatics

Attack Potency: Unknown, at most Multi-Continent level (While he doesn't state that he would destroy humanity through continental feats, he should still be equal to Volcano and Megalith in strenght)

Speed: Massively Hypersonic (Can keep up with Shadow in combat after the previous dodged Hermit's natural, cloud to earth lightning. Can also dodge Shadow's lightning attacks at point blank range)

Durability: Unknown, at most Multi-Continent level

Stamina: Superhuman, possibly higher (Put up a good fight against Shadow before he became tired. Fought and killed many armies of humans in the past)

Intelligence: Moderate (He is a very skilled combatant who's fought many sorts of fighters in the past, and as such gained a lot of knowledge over fighting styles and techniques), possibly higher (by absorbing humanity's minds)

His dungeon
Add a photo to this gallery

Retrieved from "https://vsbattles.fandom.com/wiki/Fungus_(Shadow_Fight)?oldid=6116364"
Community content is available under CC-BY-SA unless otherwise noted.