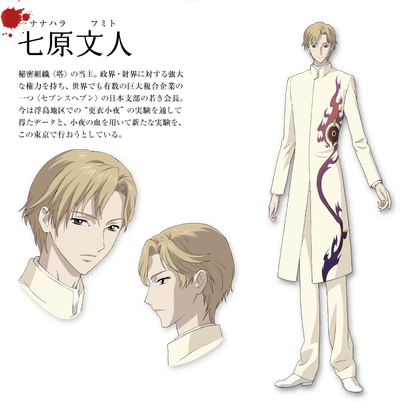 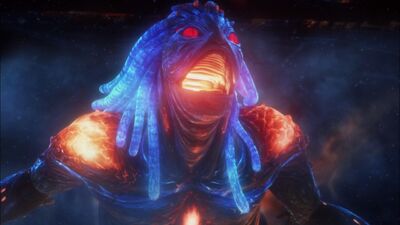 Classification: Human, Guimauve Cafe's owner/CEO of "Seventh Heaven" and "The Tower" | Elder Bairn by the end of the movie

Powers and Abilities: Skilled use of firearms, Blood Infusion (can use Saya's blood to control other Old Ones), Mutation Inducement (via Saya's blood), Pain Suppression, Psychological Manipulation, genius-level intellect, Magic, Summoning, Immunity to being killed by an Old One (via talisman), Fusionism | All from previous, Superhuman Physical Characteristics, Large Size (Type 2), Enhanced Senses, Immortality (Type 1 & 3), Regeneration

Attack Potency: Human level, Street level with gun | At least City Block level via sheer size (Smashed through numerous layers from deep underground through a skyscraper and high into the sky[1])

Intelligence: High; is the owner of a company that controls Tokyo and the one who devised the experimentation and manipulation of Saya, likes to do experiments with nature vs nurture and create human-elder bairn hybrids

Weaknesses: His obsession with Saya

The Last Mind
Add a photo to this gallery

Retrieved from "https://vsbattles.fandom.com/wiki/Fumito_Nanahara?oldid=4111513"
Community content is available under CC-BY-SA unless otherwise noted.