VS Battles Wiki
Register
Don't have an account?
Sign In
Advertisement
in: Tier 8, Tier High 8-C, Tier 8-B,
and 16 more 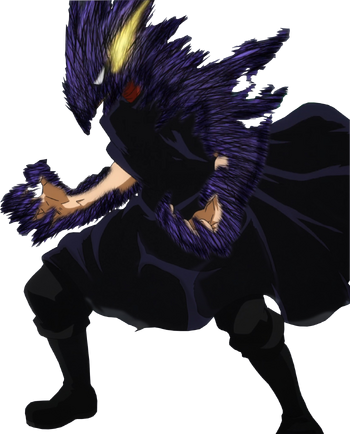 Fumikage Tokoyami (常闇踏陰 Tokoyami Fumikage), also known as Tsukuyomi (ツクヨミ Tsukuyomi), is a member of Class 1-A at U.A. High School. An oddly dark and serious individual, his strange mannerisms belie his powerful Quirk and the heart of a true hero, earning him an internship under Hawks, one of Japan's top Pro Heroes.

Powers and Abilities: Superhuman Physical Characteristics, Darkness Manipulation, Empowerment and Size Manipulation (Dark Shadow can increase his strength and size in dark places), Large Size (Type 0. Dark Shadow can grow larger than trees) | All previous abilities, Flight (Tsukuyomi can use Dark Shadow to float and move in the air)

Speed: Transonic reactions and combat speed (Comparable in speed to Grape Juice, who can dodge whip attacks), Hypersonic with Dark Shadow (Far superior to Tsukuyomi. Stole Shoto's headband before anyone could even notice. Reacted to and blocked Chargebolt's Indiscriminate Shock from a close range, with electricity being able to move at these speeds in the air), higher with Dark Environment (Much faster than Moonfish, who can outpace both Dynamight and Shoto) | Hypersonic reactions and combat speed (Able to keep up with Slice, who can briefly react to Dark Shadow's attacks in a dark environment. Saved Tailman from an attack by Chimera, who can keep up with Ingenium's Recipro Turbo), Hypersonic with Dark Shadow and Black Fallen Angel (Could somewhat keep up with a casual Hawks), higher with Dark Environment (Faster than before) | High Hypersonic reactions and combat speed (Escaped from Fat Gum's grasp and can move much faster than him. Can keep up with Dabi, who a few hours later fought and defeated Shoto and seriously injured Nejire Chan), High Hypersonic with Dark Shadow and Black Fallen Angel, higher with Dark Environment

Range: Standard melee range, up to Tens of meters with Dark Shadow (Can extend himself over a large distance far away from Tsukuyomi)

Intelligence: Above Average (He is a student at U.A. High School and normally has excellent control of his Quirk and its applications. He has gathered considerable experience fighting several villains in his time at U.A., and has been under the tutelage of veteran Pro Heroes)

Weaknesses: Dark Shadow has an energy limit and when it runs out, Dark Shadow will retract back into Tsukuyomi. It is also sensitive to light and luminous attacks will make it weaken and reduce in size. Dark Shadow becomes feral and violent when influenced by the darkness, to the point that he can actually take control of Tsukuyomi's body and move against his will. This weakness appears to have been somewhat mitigated by the time of the Paranormal Liberation War.

Dark Shadow: This Quirk allows Tsukuyomi to host a shadow-like monster within his body called Dark Shadow. Tsukuyomi can use Dark Shadow for a number of purposes, such as attack, defense, and support. Dark Shadow has shown to be sentient and capable of speech. The personality, power, and control of Dark Shadow depend on darkness and light. In darker environments, Dark Shadow becomes much stronger and can sense even the smallest of movements easily.