VS Battles Wiki
Register
Don't have an account?
Sign In
in: Characters, Touhou Project, Danmaku Users,
and 20 more 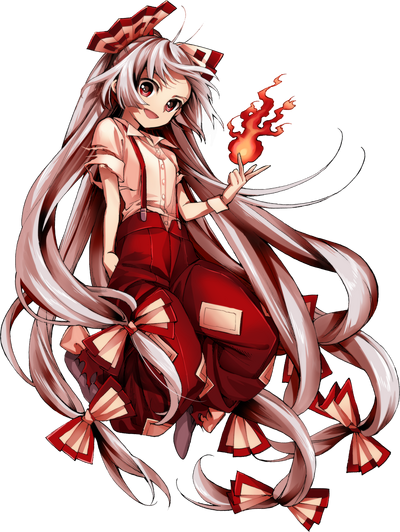 Fujiwara no Mokou (藤原 妹紅) was formerly an ordinary human, but she became an immortal being after drinking the Hourai Elixir about 1300 years ago. Now she is never able to die, though she still feels the pain of injuries as normal. She's considered to be very powerful, given her long life, the power she earned through her life, and her immortal status since she can keep fighting until she can no longer stand the pain.

Powers and Abilities: Superhuman Physical Characteristics, Immortality (Types 1, 3, and 5; Hourai immortals no longer possess a concept of life and death), Regeneration (Low-Godly), Flight, Danmaku, Magic, Forcefield Creation (Can create a forcefield to block incoming attacks. Passively creates a barrier around her when she is stunned), Fire Manipulation, Self-Destruction, Non-Physical Interaction (Can harm Phantoms and Evil Spirits with her regular attacks), Resistance to Soul Manipulation (The Hourai Elixir seemingly makes the soul invincible) and Death Manipulation (Can resist Yuyuko's attempts at killing her)

Speed: Massively FTL+ (On par with high tiers such as Reimu)

Stamina: Very high. Capable of fighting for hours against Kaguya. Very high willpower (She and Kaguya murdered each other on a nearly daily basis, with neither of them giving up).

Range: At least Tens of Meters with Danmaku (Her firing range should be comparable to Sakuya's, who can throw knives at least 36 meters)