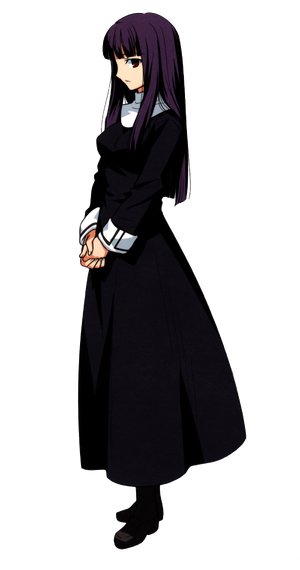 Fujino Asagami (浅上藤乃, Asagami Fujino) is the main antagonist of the third chapter of Kara no Kyōkai, "Remaining Sense of Pain". She is a classmate and friend of Azaka Kokutou, both of whom attend Reien Girl's Academy. After brutally killing the gang that raped her, she slowly realizes the fondness of killing people, including the innocents. Hearing about this, Shiki resolved to kill her. She has the ability to bending the space with her mystic eyes and then obtain clairvoyance, allowing her to bend objects without needing to see them.

Powers and Abilities: Superhuman Physical Characteristics, Magic, Spatial Manipulation with Mystic Eyes of Distortion (Sees her targets on a flat plane that she can bend, fold, or rip), Clairvoyance (She can see great distances and beyond visual obstructions)

Attack Potency: Human level, her ability ignores durability (The Mystic Eyes of Distortion was said to affect things regardless of "strength or scale")

Speed: Supersonic+ to High Hypersonic, with Massively Hypersonic reactions and combat speed (Could follow Shiki's movements in her near-death state. Shiki initially had trouble even reacting to her powers)

Durability: At least Street level (Fell from a height of several dozen meters without major injury despite being in a near-death state)

Stamina: Below Average during Episode 3 (Her appendicitis wore her out as she utilized her abilities), Average after her fight with Shiki

Range: Over 500 meters with her mystic eyes (Affected the entirety of a bridge of this length)

Intelligence: Average (She is noted to be a model student, being kind to classmates, never causing trouble, and frequently achieving the highest scores, except for Literature, as she "lacked expressiveness")

Weaknesses: Fujino can't use her powers if her sense of pain is nullified. She had a terminal case of appendicitis, she would have died without Shiki's treatment. After the clash with Shiki, her eyesight became extremely poor to the point where she has to rely on a blind stick. She can't bend conceptual things, magic, and any other objects she thinks "unbendable".

She views her target as if they were on a two-dimensional plane, which she can bend, fold, and interact with, ultimately twisting and violently ripping them apart. This is said to be done regardless of the strength of scale as long as "if it's a substance that exists". Her left eye twists leftwards and her right eye twists right; a channel is needed for each direction. Note that the Distortion Fujino possesses is far more powerful than the average - by comparison, a normal user of Distortion would take several days just to bend a human arm (She can do that in less than a 1 second).

The power of Distortion is limited as long as she thinks “unbendable” won’t bend. But her powers only work on physical objects, and magical barriers and Bounded Fields cannot be bent, but what they are built on certainly can.