Note: This profile contains spoilers for the Saijaku Muhai no Bahamut series. Please do not continue if you have yet to read the series and do not want to be spoiled. 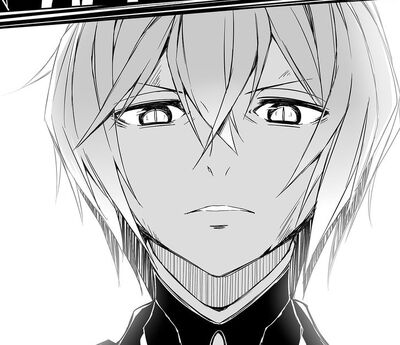 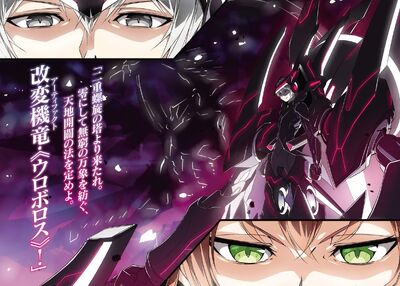 Fugil Arcadia is one of the main antagonists of Saijaku Muhai no Bahamut. He was the first prince of the Old Arcadia Empire and Lux Arcadia's older half-brother.

With the help of Count Atismata, Lux and Fugil worked together to overthrow the Old Empire, and Fugil ended up killing his entire family against his brother's will. After the coup d'état was complete, Fugil disappeared mysteriously, leading to Lux's search to find him. 5 years later, Fugil reappeared as a bodyguard to the first imperial princess of the Lords, Listelka Rei Arshalia, helping them to destroy Sacred Eclipse and bring "new peace" to the world.

However, it was later revealed that Fugil isn't Lux's brother, but a legendary knight known as the "White Hero" who has lived for over 1000 years and helped Arshalia Rei Arcadia to create Sacred Eclipse. After betraying Listelka, Fugil used the power of Avalon to accomplish Arshalia's goal, helping Sacred Eclipse to create a world that would bring salvation to the weak.

All from base enhanced, Forcefield Creation, Can bypass force fields, Energy Manipulation (Can create and nullify energy blasts), Shockwave Generation (All Drag-Rides are able to generate shockwaves with Howling Howl), Flight, Attack Reflection and Pressure Points (Critical Hit can reflect enemy attacks while targeting a weak point into their weapons/limbs to break them)

All from EX Wyvern's key enhanced, Magnetism Manipulation, Reload on Fire, Pseudo-Time Stop (Can decelerate time to the point it's undistinguishable from stopped time), Transformation (Over Limit), Possibly Pain Inhibition (Should be able to reduce his own pain into less than a tenth with Reload on Fire, but has never done so due to his inability to feel pain in the first place)

Stamina: Infinite. Even for a member of the Arcadia Family, Fugil has an extremely high-compatibility with Drag-Rides, to the point even the Xfer, the creators of Drag-Rides who made them solely for their use, admitted Fugil had better compatibility with them than themselves. Even when Bahamut drains a massive amount of energy for its use, Fugil can use it for extended periods of time without getting tired at all. Using End Action normally leaves the user out of air and open to enemy attacks, but Fugil has been shown to take action shortly after using it without any kind of problem. In addition to this, Fugil received a 100% Baptism, when a 10% one can inflict agony beyond imagination, being described by people who survive them as having their blood boiling in addition to feel pain across their entire body, and stated by Singlen to tamper a lot the nerves in the whole body, and recover from it. Due to having twice as much Baptism, he should scale from Singlen, who was able to fight without issues even after a sword pierced his heart. Even when Over Limit normally can put its users into a coma for a week in the worst case, and to decrease its user's mobility for days in the best one, Fugil was able to use a second Over Limit shortly after consuming a first one without showing any kind of drawback. Fugil hasn't had any kind of need to rest or sleep for over 1000 years.

Intelligence: Genius. Fugil is a genius Drag-Knight, being well-versed on the history, strategy and tactics of the Arcadia Empire, having developed numerous techniques that minimize the lag between his movements and those of his Drag-Ride's and a really skilled swordsman (as he was the one who taught all that to Lux). He has schemed the rise and fall of entire nations over the course of centuries. He is privy to knowledge unknown to many, such as the existence and real nature of Avalon, Sacred Eclipse and the Automata. He is able to create complex strategies under extreme pressure, as it was shown he was able to create counters to their abilities while fighting against five of the Seven Dragon Paladins and Aeril at once.

Standard Equipment: His Drag-Ride, Ouroboros, and the Automaton Arshalia (who uses Ouroboros for him when he activates Infinity to use Bahamut)

Weaknesses: The first five seconds of Reload on Fire actually make Fugil weaker, and the compression strengthening lasts five seconds, although Fugil is able to reactive it any number of. While Reload on Fire can increase both his destructive power and speed, it CANNOT increase both at the same time. Using Recoil Burst requires a great deal of concentration, but Fugil doesn't have problems using the technique even under high pressure due to his great skills. Over Limit lasts five minutes, but Fugil is able to reactive it shortly after losing it with Bahamut, while he would lose the ability to use Ouroboros for years after using it on Over Limit.

Notes: For an in-depth explanation of Baptism, see here here.

Given the nature of Infinity's ability, Fugil is the only character in the verse that is able to use two different Drag-Rides at the same time, meaning he is able to use both Ouroboros and Bahamut at the same time, and can potentially use it to recreate any Divine Drag-Ride other than just Bahamut, as shown when he created a copy of Typhon. However, it should be noted on versus threads if Fugil is going to use Ouroboros, Bahamut, both, or a totally different Drag-Ride.