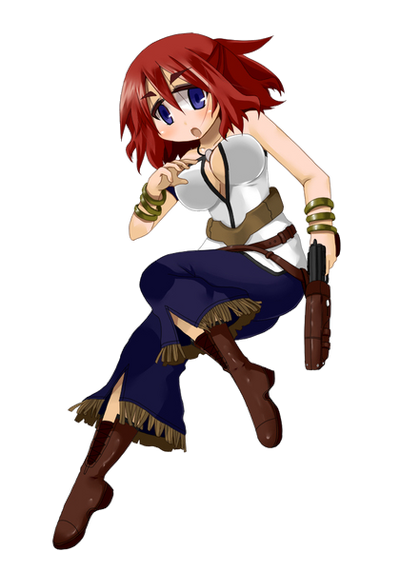 Fuga is a playable character in Wonderful World. A combatant belonging to a Laboratory. Her younger brother is altered as an experimental body of the organization and it is obstinate, so she follow it accordingly. She is silent during her duties, she just silently does her job. Originally quiet but gentle woman.

Lifting Strength: Unknown. At least Athletic Human (Can lift the currently unplayable Heathrod at 125kg, but it's possible he can do better)

Durability: Small Town level (According to this calc, Chartette's swing alone should be capable of this)

Standard Equipment: Witch Winder Fuga's twin Guns. It is most likely based on the IMI Desert Eagle .50 AE pistols, and have all the primary qualities of said gun, with the exception of ammo base, which has a shared clip system based on Magic. It uses regular firing, Ice shots, Wind shots, and Darkness shots. Despite poor compatibility in magic, Fuga can fix magical objects for a while at least.

Intelligence: Very High (Fuga can complete her missions with high success, and is a very resourceful Femme Fatale.)

Weaknesses: Her guns aren't that fast in terms of firing rate.

Feats: Is a quiet killer, Tends to what appears to be a rare weapon duo, Her gun is on a class of its own, but is related to 44 Magnums & IMI Desert Eagles; both powerful sidearms.

(NOTE: All moves requiring rounds can have four differing attributes.)

Retrieved from "https://vsbattles.fandom.com/wiki/Fuga_(Wonderful_World)?oldid=4617006"
Community content is available under CC-BY-SA unless otherwise noted.