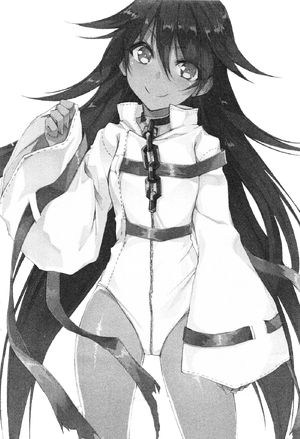 Fu Xiaoli is one of the Four Sages of the Shinryuu Temple and is one of the desperados of China. Due to breaking three of the Five Prohibitions, she was imprisoned, but later escaped and is now on the run from the temple being around by the Great Sage.

Superhuman Physical Characteristics, Magic, can use magic to boost her physical stats and create a barrier around herself, she can reduce an opponent's stamina with minor blows and cause them to faint with fatal blows whilst using her device in illusionary form, Expert Martial Artist (Xiaoli is a master of the Chinese martial arts which have a history of over 4000 years), Pseudo-Mass Manipulation (Taizan is a move where the user grips firmly to the ground and makes it seem like they become one with the ground gaining immense strength and stability from it, when Xiaoli used this against Stella she was capable of hitting with the full force of mountain Edelberg), Statistics Amplification (Kinkirou makes her able to ignore all survival instincts and give her a ten times boost in statistics), Conceptual Manipulation, Power Mimicry (Fu Xiaoli's ability is to manipulate the concept of "copies", which lets her replicate any ability she comes in contact with. While the copies do have slight differences she has also shown to be resistant to any ability she copies)

Acausality (Type 4. All desperados exist beyond the fate of the world, completely transcending it. Through this Desperados ignore their restrictions from fate, Amane Shinomiya's Nameless Glory and even The Prime Minister who can see the fate of the entire world could not see anything about their fate or future), Fate Manipulation (As beings who have transcended the fate of the world, Desperados are the only ones capable of changing their own fate and the fate of the world around them, furthermore anyone who decides to challenge a desperado sees the end of their fate and all of their beliefs negative beliefs become reality. Due to being transcendent of Fate and Causality their gravitational pull of fate and causality ends up swallowing the will and fate of everyone around them), Causality Manipulation (Desperados are capable of forcing effects on people by just willing it), Death Manipulation (Desperados are capable of killing other people just by willing it, furthermore people become fated to die the moment they challenge a desperado), Statistics Amplification and Empowerment (The amount of magic a person possesses is linked to their fate and impossible to change, however, Desperados are capable of changing their magic capacity increasing it to levels even beyond A-Rank students), Aura (The fate of desperados when they are showing bloodlust can be felt and that fate spells "death" and makes people experience their death in detail), Fear Manipulation (Her aura passively causes people around her to have extreme fear), Willpower Manipulation, Paralysis Inducement, Perception Manipulation (All Desperados can make opponents experience extreme fear, paralyze them, make them lose their will to fight and alter their senses with their presence alone), Resistance to all desperado abilities (Can only be affected by stronger desperados)

Stamina: Extremely High (Seemed unbothered by the conditions of Edelberg and is the closest person to the God of War league, a tournament where people have to be ready at all times even in their sleep)

Range: Normal melee range up to several kilometers with abilities

Standard Equipment: Her device, Banki, which takes the form of 2 Indigo Blue gauntlets

Intelligence: Extraordinary Genius (Is the youngest person ever to get so close to the God of War title. One of the most skilled prodigies in the series capable of fighting people way faster than her with pure skill. Mastered China's 4000 years of martial arts at a very young age)

Desperado: Fu Xiaoli is a being who has transcended the fate of the world, as such she can ignore limits set to her by fate and control her own fate and the fate of the world around her. Furthermore like all Desperados she possesses an aura which can instantly induce fear, manipulate the perception or even paralyze any foe at will besides passively making people feel their own death in the fate of desperados.

Master Hand-to-Hand Combat: Xiaoli is an undisputed master of Shishou, the martial art of the Shinryuu Temple closest to the God of War. She has a multitude of techniques that has both offense and defense, able to contend with some of the strongest Blazers such as Kiba, Raab, and Stella.

Poison Manipulation: An ability that allows the user to create and use all poisons in the world.

Ice Manipulation: Kiba's ability as a Blazer, is to manipulate ice, which is among the Nature Interference System.

Mahyou Juuroujin (魔氷十狼陣, Demonic Ice Ten Wolves Formation): His noble art, where Kiba stabs the ground using his Shimotsuki, causing a white mist, which covers the area, then creates nine ice clones that can fight on their own. These can also be used to transform into ice shackles, trapping the opponent.

Zeppyou Kassatsugeki (lit. Severing Ice Killing Strike): A stab, that instantly freezes anything that it touches into absolute zero.

Wind Manipulation: Xiaoli has shown the ability to use winds which she has copied from an unknown user.