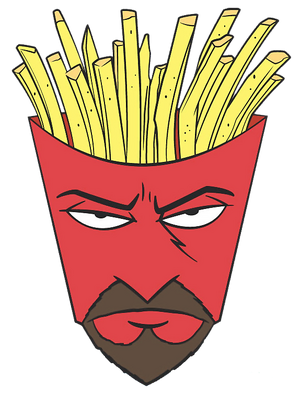 Frylock is one of the four main characters on Aqua Teen Hunger Force. He is the most rational and intelligent member of the Aqua Teens. He is also considered to be a scientist; although, some of his motives and means of doing scientific research are a bit shady at times.

Powers and Abilities: Superhuman Physical Characteristics, Genius Intelligence, Enhanced Senses via Frydar, Heat Manipulation and Heat Vision with eye lasers, Ice Manipulation (Froze Carl instantly), Electricity Manipulation, Fire Manipulation, Telekinesis, fairly skilled in CQC, Preparation, Stealth Mastery (Sneaked into a man's house without him noticing) Hammerspace, Flight (Despite only appearing to levitate he is capable of complete flight) | Same as before. Size Manipulation (His Shrink Ray can increase and decrease size), BFR and Teleportation (Made a "Time Machine" that only works as a teleporter), Duplication (Has a cloner that can clone objects and people), Air Manipulation (Has made things like the Super Toilet which use highly compressed air to create a super vacuum), Regeneration (Low-High) and Immortality (Types 1 and 3) with Ceaseless Shampoo (Regenerated from these), Explosion Manipulation via Titanium Suit Of Armor

Attack Potency: Small Building level (Did this. Consistently shown to be able to kill humans. Shake did this with his powers. Destroyed a couple of trees. Completely froze Carl) | At least Small Building level (The missiles on his titanium suit is superior to Frylock and can kill Shake). Can potentially ignore durability with super vacuum (The super vacuum was stated to completely obliterate objects)

Striking Strength: Small Building Class (Can harm those who can harm him)

Range: Several meters. Up to 100 meters with handgun | Higher than before

Intelligence: Extraordinary Genius (Creates great inventions on a semi daily basis. Can compress all the world's knowledge, except sports, onto a disc. Should be able to weaponize his creations with preparation time)

Weaknesses: If the jewel in his back is removed he will lose his powers and eventually die. | If an object is cloned too much its molecular structure will become unstable.

Key: Base | With Inventions and Preparation Time

Retrieved from "https://vsbattles.fandom.com/wiki/Frylock?oldid=5464703"
Community content is available under CC-BY-SA unless otherwise noted.