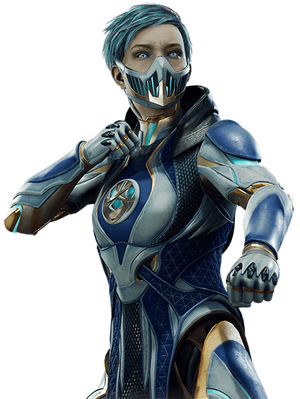 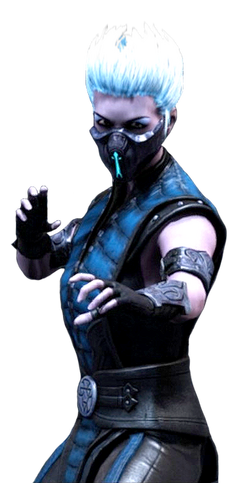 Frost is the only apprentice of the Lin Kuei's grandmaster: Sub-Zero. She has secretly been plotting to take Sub-Zero's position of power throughout the years during the Original Timeline and is currently a cyborg in the current one.

Grandmaster Sub-Zero’s most dangerous apprentice. When Sub-Zero made historic peace with his clan’s enemy, Scorpion, defiant Frost challenged her Grandmaster as unfit to lead. Sub-Zero defeated and banished Frost. For years, she sought the power to destroy him. Now she has it.

Superhuman Physical Characteristics (Cybernetic enhancements grant her increased physical strength which allows her to punch heads off and lift opponents up into the air), Martial Arts (Wrestling, MMA, Yuan Yang, Ninjutsu, Tong Bei), Weapon Mastery (Wields weapons such as swords, knives, drills, scythes, throwing stars, kunai and her own body parts), Stealth Mastery (Retains her Ninjutsu mastery even as a cyborg), Cyborgization (Full, only her brain is intact), Ice Manipulation (Able to make ice from the numerous devices inside her body), Limited Telepathy (Controls the entire Cyber Lin Kuei with her thoughts), Natural Weaponry (Can use her head as bludgeoning tool), Teleportation (Can teleport in a burst of ice and wind), Immortality (A degree of types 2, 3 and 8. Can function without a head. Can regain lost body parts by simply calling in extra body parts. As long as she can summon extra body parts and isn't cut off from the Cyber Lin Kuei factory, she can regain lost body parts), Body Control (As a Lin Kuei cyborg she can disassemble/reassemble her body and spin her joints at 360 degrees), Self-Destruction (Able to detonate her own head, freezing those who are caught in the blast), Explosion Manipulation (Via ice bombs), Limited Data Manipulation (Can manipulate the Cyber Lin Kuei's mental data), Air Manipulation (Can generate cold winds), Energy Projection (Able to emit a blast of blue energy that can freeze others. Can also summon a field of energy from her core that freezes those who are caught in it), Forcefield Creation (Can create full frontal shields out of energy), Statistics Amplification (Can overload her core for increased stats), Homing Attack (Her projectiles follow the opponent), Summoning (Can summon drones), Flight (Via jet propulsion system), Information Analysis (Can scan her opponents, scaling to the cyborgs Sektor and Cyber Sub-Zero), Self-Sustenance (Type 1 & 2), Inorganic Physiology (Type 2), Immunity to Soul Manipulation (No longer has a soul as a result of the cyberization process)

Attack Potency: Large Building level (Utterly dominated Cassie Cage in a fight until she made a comeback) | City level (Enhanced by the cybernetic benefits of the Cyber Initiative. Fought and defeated by Raiden and Sub-Zero/Scorpion. Superior to Sektor and Cyrax)

Intelligence: Gifted (Regarded as a talented student by Grandmaster Sub-Zero. Became the ultimate winner of the Lin Kuei tournament and displayed ice powers that rival her master's powers. Skilled underground MMA fighter with a total record of 21 wins, no losses [until Cassie came along], 13 flawless victories and 21 fatalities)

Frost in MKX.
Add a photo to this gallery