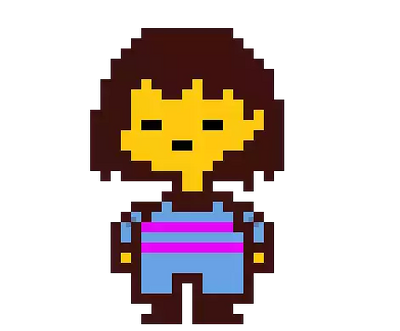 Frisk is the protagonist of Undertale and the seventh human to fall into the Underground. Virtually nothing about them is known about their life prior to their fall, as even their gender remains ambiguous. Being taken in by Toriel, they eventually decide to leave and explore the Underground to potentially return to the surface, eventually convincing their caretaker to let them go or forcing their way out by murdering Toriel. From the on, Frisk manages to change the course of the events of the Underground forever, for better or worse.

Name: Frisk, The Human (By monsters), You (Influenced by the player to an unknown degree, the ideal name to give the character being one's own)

Age: Initially pre-teen, somewhat higher at the end of the game (They're surprised of not fitting in their bed)

Classification: Human child, "The Angel" (Believed to be so, despite it likely being someone else)

Powers and Abilities: Superhuman Physical Characteristics (Their Determination grants them their powers and most superhuman stats, it's unclear if Frisk has ever been without any amount of Determination), Regeneration (Unknown normally, Low-Godly with high enough Determination), Self-Resurrection, Immortality (Type 4 and 7 normally, can resurrect as a disembodied SOUL. Type 3, only with unimaginable levels of Determination), Acausality (Type 1. Keeps their memories after time turning back to previous points by their own powers or that of others. Although with their "control over the timeline"/Time Manipulation matched, repeated deaths make their grip in the timeline slip away, which can eventually result in them forgetting everything experienced little by little), Time Manipulation (Has the ability to SAVE into a point in time when particularly determined, and LOAD back in time to the last SAVE they made at will, even after dying), Ability to gain LOVE through killing, Acute hearing and sense of smell, Can digest nearly anything, Statistics Amplification with Flex and Clear Mind, Social Influencing, Reactive Power Level with Determination (Allows Frisk to almost immediately fight around their opponents level up until he has reached full Determination. This normally scales Frisk to the opponents attack as shown by their inability to harm Mettaton in their base and have trouble harming Jerry), Minor Life Manipulation with Draw (Can draw things that come to life), limited Invulnerability (The game treats INV as this), Longevity (A human's SOUL can exist for millennia), Subjective Reality (Capable of creating physical items out of their hopes and dreams when extremely determined), Heat Manipulation with Heat Up and Cool Down, Sleep Manipulation via Sing, Self-Healing (Can recover physical and spiritual damage by eating certain types of monster food), Power Nullification with Stare, Flight (With their jet-pack), Resistance to SOUL Manipulation (Can take SOUL attacks as physical ones), Heat Manipulation (Capable of resisting an explosion from a MTT brand oven), Electricity Manipulation (Barely affected by an electric shock that briefly hurt Papyrus) and possibly Poison Manipulation (The CORE seems to be filled with ozone, which Frisk was unaffected by)

Attack Potency: Small Building level with minimal Determination (Comparable to other low level monsters, who can damage them), higher when filled with greater levels of Determination (Defeated Asgore when not trying to kill him. Made minimum damage to Photoshop Flowey, who was holding back)

Striking Strength: Small Building Class with minimal Determination (Capable of trading blows with other monsters who can harm them), higher when filled with greater levels of Determination

Durability: Small Building level with minimal Determination (Tanked the result of an overheating MTT-brand oven while casual), higher when filled with enough Determination (Took numerous blows from Asgore), the ability to SAVE and LOAD makes them extremely difficult to kill

Stamina: Immense (Able to navigate Hotland, capable of withstanding hoards of attacks from numerous different monsters without any signs of tiring)

Range: Standard melee range with weapons. Universal via SAVE

Weaknesses: While extremely difficult, sufficient failure can make a user of Determination give up, though this can result in a Reset much earlier than the last SAVE. Someone with their same Determination (as it exists in Undertale) and higher determination will result in their ability to SAVE and LOAD being disabled.

Note: See this blog about misconceptions in Undertale for doubts over stats and claims we had during former years.

Frisk's tarot card art
Add a photo to this gallery

Sigma (Zero Escape) Sigma's Profile (Both were 9-A, and speed was equalized)

Hat Kid (A Hat in Time) Hat Kid's Profile (Low-High Levels of Determination Frisk and End Game Hat Kid were used, both were bloodlusted, and speed was equalized)

Isaac (The Binding of Isaac) Isaac's Profile (Frisk had Low-High levels of Determination and Isaac had every item. Speed was equalized)

Retrieved from "https://vsbattles.fandom.com/wiki/Frisk?oldid=7065452"
Community content is available under CC-BY-SA unless otherwise noted.