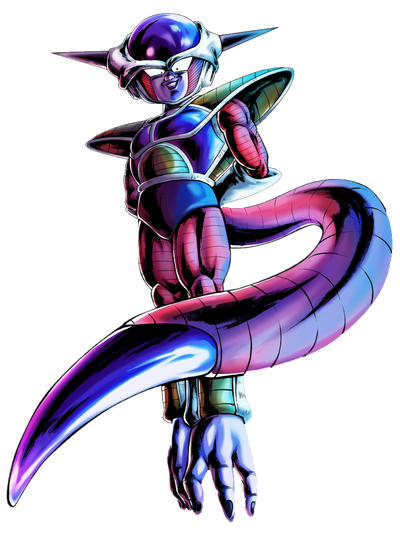 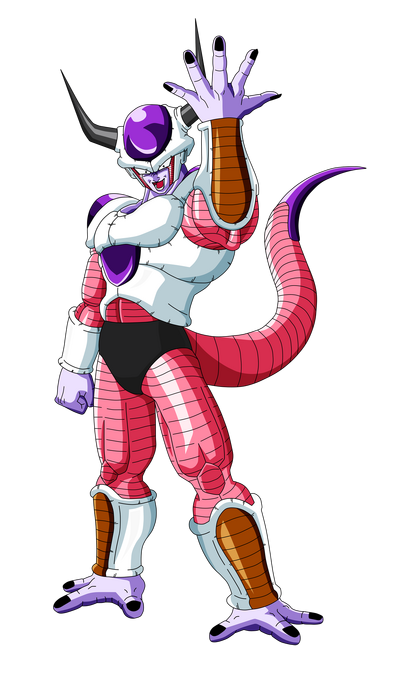 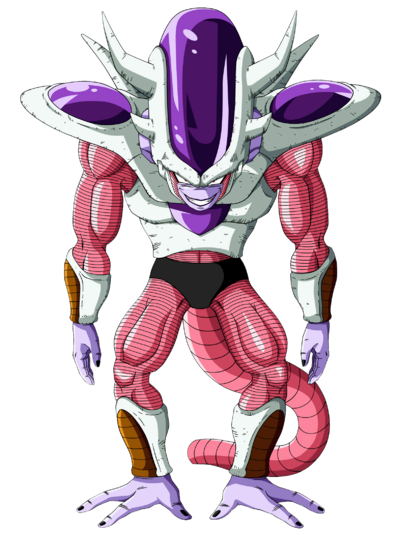 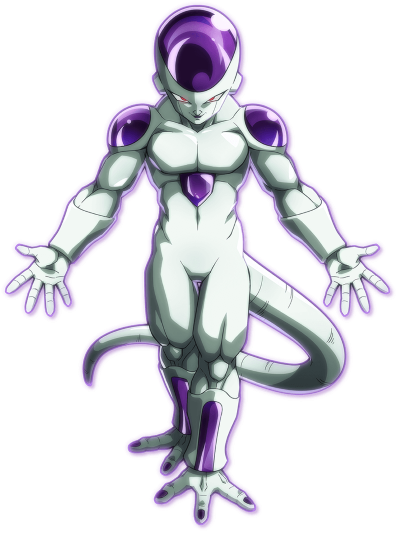 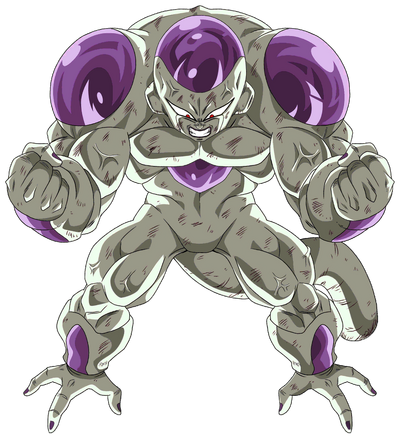 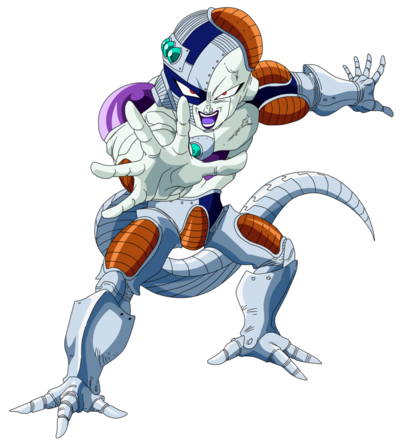 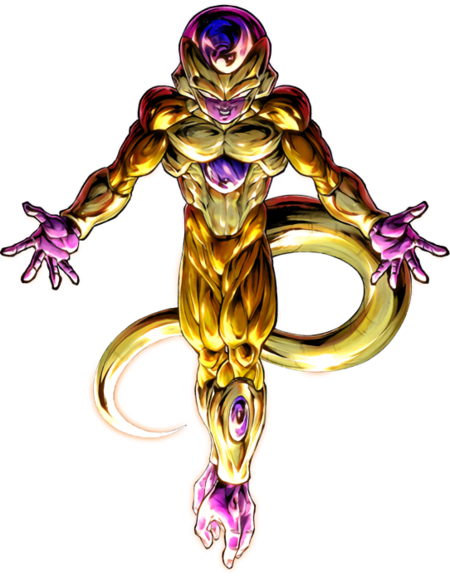 Frieza is the leader of the Planet Trade Organization and the son of King Cold, who, unopposed, ruled over the majority of the Seventh Universe for decades. Born with an abnormally high power level due to his status as a mutant and a hybrid, Frieza is a prodigy who never needed to train even a single day in his life to access his phenomenal power. Due to his fear of the legendary, apocryphal form known as Super Saiyan, Frieza destroyed Planet Vegeta and eradicated the Saiyans, keeping only a few alive, most notably, the young prince Vegeta, for his own uses. His actions are a catalyst for nearly everything that happens in the original Dragon Ball, and due to this, he can be seen as the most personal and important antagonist of the series. Ultimately, in a showdown with Goku on Namek, he ends up causing the Super Saiyan transformation he feared so much, leading to his own downfall.

Powers and Abilities: Skilled Martial Artist, Skilled Marksman (Killed three Saiyan snipers with death beams even without watching), Superhuman Physical Characteristics, Ki Manipulation (Can be used defensively and offensively, to strengthen his skin or to fire ki blasts, which can home in on targets and form defensive barriers), Ki Sensing (Can locate others by reading their ki; at first, he needs a scouter to do so, but he eventually figures out how to do it himself), Self-Sustenance (Type 1), Flight, Spaceflight, Acrobatics, Accelerated Development (Training; Physical Stats, Abilities), Shockwaves Generation, Afterimage Creation, Paralysis Inducement (Can trap opponents within his Imprisonment Ball, in which they cannot move), Power Mimicry (Copied Krillin's Kienzan), Telekinesis (Can telekinetically manipulate and carry objects), Explosion Manipulation, Body Control (Can alter his body structure to create lower forms that restrict his power, and can transform into his higher forms to release his true power), Immortality (Type 2; Frieza can survive things such as being cut in half or even diced to pieces, though he cannot regenerate and is left helpless when wounded more extensively), Regeneration (High-Low when transforming into his final form; Frieza regenerated his tail after transforming), Cyborgization (Partial as Mecha Frieza), Resistance to Extreme Cold and Cosmic Radiation | All previous abilities, Pressure Point Blasts, Can possibly create dimensional rifts and destroy space-time and pocket dimensions with his energy via powerscaling, Resistance to Empathic Manipulation and Existence Erasure (Held back and survived Sidra's destruction energy)

Attack Potency: Dwarf Star level (Casually destroyed Planet Vegeta) | Dwarf Star level (Is vastly superior to his first form) | Dwarf Star level (Easily stomped Piccolo, who had previously matched him in his second form) | Small Star level (In his true, final form, Frieza can overpower Vegeta, who was stronger than his previous forms, without exerting himself in the slightest, easily overpower Goku with less than 50% of his power, and match him as a Super Saiyan at 100%. He's even stronger as Mecha Frieza, but still no match for Future Trunks) | Solar System level (Far stronger than Tagoma, and easily defeated Gohan with a barrage of Death Beams) | Universe level (Clashed with Goku, and casually defeated Roselle, Murichim, Jimeze and Frost in the Tournament of Power) | Universe level (Slightly stronger than Super Saiyan Blue Goku at first, and after his mental training in Hell, he grew in power to match a much stronger Super Saiyan Blue Goku) | Universe level+ (Likely trained after the Tournament of Power and managed to survive being manhandled by an enraged Super Saiyan Broly for one hour straight. Viewed as a threat by Vegeta, who believed he needed to keep training so as to not be surpassed and eventually killed by him)

Stamina: Extremely high. Frieza's endurance is extraordinary, as demonstrated in his long, painful battle with Goku. Even after taking a Spirit Bomb head-on, Frieza still had enough stamina to keep on going and fight against Goku as a Super Saiyan, powering up to 100% and matching him in power. However, due to Frieza's inexperience with the form, at 100%, Frieza's ki is rapidly drained. Even so, he can endure being severely injured during his fight with Goku and ultimately even being cut in half and blasted into Namek after being completely drained of ki, going on to survive its explosion. After he first gains the form, Golden Frieza drains stamina rapidly and thus cannot be maintained for long, but he eventually grows to master the form and grow past this weakness

Standard Equipment: His scouter and hoverchair

Intelligence: As the tyrannical ruler of much of Universe 7, Frieza is an intelligent and cunning leader who maintained his iron grip over his territories through the use of terror and the effective deployment of his troops. In combat, he is an extremely skilled hand-to-hand combatant capable of fighting on par with the likes of Goku even when playing around, and he is very well-versed in the use of ki and ki blasts, replicating and improving upon Krillin's Kienzan with his own homing variant. However, for all of his skill, Frieza is incredibly overconfident and isn't used to utilizing his full power. Due to his arrogance and obsession with revenge, he rushed to fight Goku immediately after achieving his Golden Form, putting no time into mastering the form to avoid the ridiculous amounts of energy it drains

Weaknesses: Frieza is extremely overconfident and sadistic, preferring to drag out an opponent's suffering over time and humiliate them rather than kill them instantly, even when such a thing is fully possible for him. Due to his inexperience with the form, at 100% power, Frieza rapidly drains his ki and cannot fight in this form for long, and his Golden form has the same weakness before he masters the form during his mental training in Hell

Ki: The fighting power and life force of a martial artist, a tangible energy derived from the user's vigor, courage, and mind. It can be used in a number of ways, such as to surpass the limits of one's body to greatly increase in strength, and it can be fired as blasts of energy or used to create defensive barriers. Possessing such ridiculous strength at birth that there were few who could match him, Frieza is a horrifically powerful mutant hybrid of his race whose power is so great that to properly control it, he had to create lesser, weaker forms to restrain himself and his power. He is incredibly skilled in the use of ki, though his ignorance to its spiritual side meant that he didn't know how to sense ki at first.

Mutant Hybrid Physiology: Among his race - known only as Frieza Race - Frieza possesses a phenomenally high level of power and cruelty unseen even in his father, King Cold, due to his extreme mutations. His power is such that even without any training, he is on the same level of power as his father and could easily overpower any who dared oppose him. However, in his true, final form, Frieza lacks much control over his power, and thus to restrain himself and keep his power under control, he created a set of three lower transformations, each weaker than the last. As he transforms, more and more of his power shows through, until he reaches his final form, regenerating minor wounds in the process, and unleashing the full, terrifying force of his power. Due to his general lack of experience, however, he cannot properly control himself at 100% of his power, lacking stamina and control, and thus cannot maintain the form for long.

Frieza's most striking trait, however, is his ridiculous survivability, which even the other members of his family lack. He is able to survive being bisected by his own attack and being blasted into Namek, which exploded shortly after, despite being completely drained of ki in the process, and when he was resurrected by Shenron, he appeared as the several bits of himself that Trunks had cut him into. From there, he was resuscitated and fully healed by a Medical Machine despite his injuries. He can also survive in the vacuum of space.

Superman (Smallville) Superman's Profile (Clark was in his Full Power Unlocked key and Frieza was restricted to his First Form. Speed was equalized)

Dr. Ivo Robotnik (Sonic the Hedgehog) Archie Robotnik's Profile (Post-Tournament of Power Frieza was used, Robotnik had all of his machines up to Low 2-C, and speed was equalized)

Vegeta (Dragon Ball) Vegeta's Profile (SSB Vegeta during the beginning of the ToP and Golden Frieza after his training in Hell were used. Fight takes place in the Tournament of Power arena)