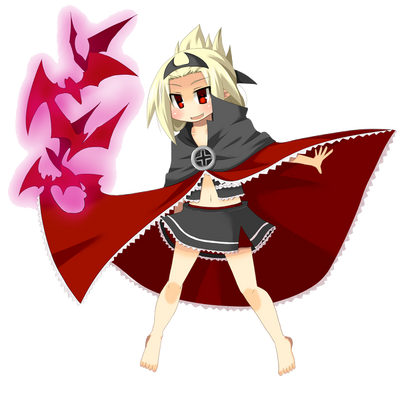 Friede is a playable character in Wondeful World.  She is a very powerful Demon of Makai of the Majin Clan as the Tusk. She has lived for many years and has experienced the war of the past man and demonic. Although she is on the side of the demons, hedonism who thinks that anything is fine if there is no particular hostility towards humans and boredom is possible. she is weak against sunlight, but she does not become ash, but its power is only halved. Normally it is a castle of the Makai, letting the maids squirrel and peeping at the state of the ground. She is also the one Lunathia is currently learning from.

Standard Equipment: Can summon at most 4 Pulse Laser shooting eyeballs (which all four can be used in Evil Omen.), her cloak; which is like a swiss army knife, Mastery over Darkness, and most important: Her fangs.

Intelligence: Extremely High (Not only is she the brains of the Majin Clan, she even witnessed an entire war.)

Weaknesses: Daylight, though this doesn't kill her. Instead, 50% of her overall power is reduced.

Feats: As a child, she witnessed the beginning of the Human-Demon war. Is easily the smartest character with 574 years of wisdom, She even passed her knowledge down to Lunathia, her disciple.

Retrieved from "https://vsbattles.fandom.com/wiki/Friede_(Wonderful_World)?oldid=6958188"
Community content is available under CC-BY-SA unless otherwise noted.