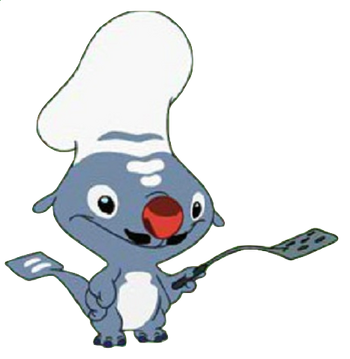 Experiment 062 was the 62nd genetic experiment created by Jumba with Hämsterviel's funding. He was designed to be Jumba's personal chef, but instead made unhealthy food that quickly made people fat and overweight, then ate the fattened victims. Presumably, when the food fattened Jumba up to a massive enough size, 062 tried to eat him, but Jumba was able to deactivate him in time. 062 and the other first 624 experiments were deactivated and smuggled to Earth by Jumba during his mission to capture Experiment 626. His one true place is running a healthy French fry hut and making delicious low fat food, but his actions have promoted him to a restaurant chef.

Age: Unknown, created prior to Stitch

Powers and Abilities: Superhuman Physical Characteristics, Empathic Manipulation (People who taste his food can't stop eating it, despite knowing and understanding its effects), Biological Manipulation (Can cause people to bloat up to ridiculous degrees via eating his food), Can utilize any kitchen tool as a weapon

Attack Potency: Island level (Was able to keep up with the likes of Stitch and Leroy. His food is able to bypass durability)

Speed: Subsonic (Should be comparable to other experiments, who were able to outrun Stitch briefly)

Intelligence: Gifted at cooking, able to create a wide variety of dishes almost instantly. Above average in battle, as he was able to trick many of his opponents into eating his food, such as Stitch, Captain Gantu or Dr. Hämsterviel

Weaknesses: The bloating effects of Frenchfry's food wears off after 24 hours