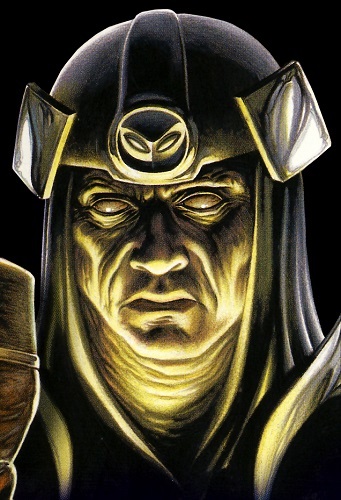 Age: Over 400 years old at the time of his final death

Powers and Abilities: Superhuman Physical Characteristics, Precognition/prescience, Force enhanced reflexes/reactions, Clairvoyance, Telepathy (Attacked a person from light years away), Telekinesis, Energy Manipulation (Should be capable of utilizing the same Force Blasts Exar Kun had with Naga Sadow's Amulet), Non-Corporeal (Spirit form only), Sith Healing (Was able to heal Exar Kun's mortally wounded self through the power of the Dark Side), and Matter Manipulation on a sub-atomic scale (As per creating a Holocron, it requires one to make numerous precision alterations to it on a subatomic scale)

Lifting Strength: Peak Human, can be augmented to Superhuman levels thanks to Force Amplification

Durability: Street level naturally, Planet level with Force Amplification (Survived as a non-corporeal spirit for hundreds of years past his physical death)

Intelligence: Considered a prodigy by the Masters of his era, very proficient in use of both sides of the force

Retrieved from "https://vsbattles.fandom.com/wiki/Freedon_Nadd?oldid=5795193"
Community content is available under CC-BY-SA unless otherwise noted.