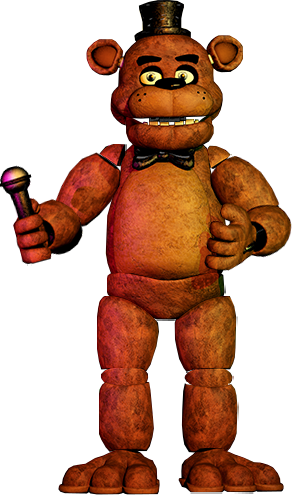 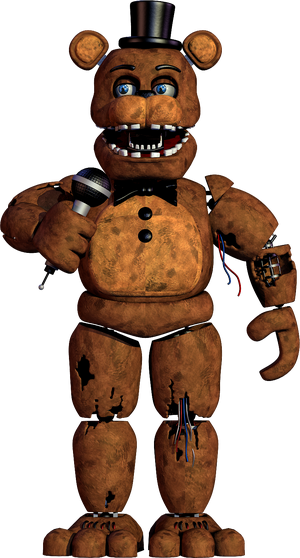 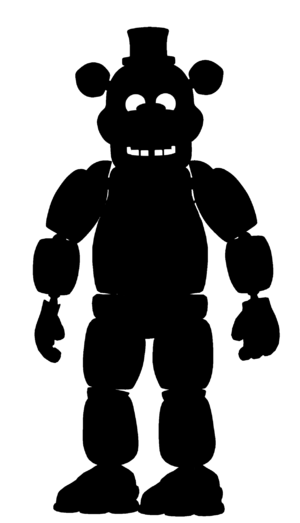 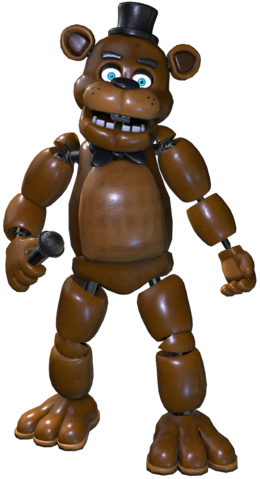 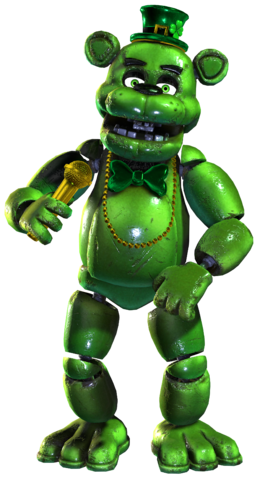 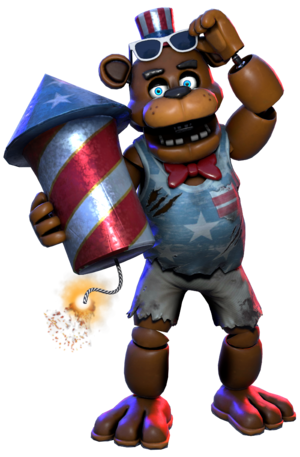 Freddy Fazbear is an animatronic and one of the many antagonists in the franchise, as well as being the featured animatronic in both the first and second games.

Freddy is a brown animatronic bear with a lighter shade of brown on both his stomach and puffy muzzle. He stalks the player in the first game during Night 3 and on by moving while the player is not watching the monitor of the cameras.

Age: At least 20 (Likely built in the early eighties)

Superhuman Physical Characteristics, Self-Sustenance (Types 1, 2 and 3), Immortality (Type 2), Inorganic Physiology (Type 1), Stealth Mastery, Berserk Mode (Goes into an aggressive state around adults, even to the point of overcoming their innate passivity during the day), possibly Information Analysis (As the original animatronics were retrofitted with some of the technology of the "Toy" animatronics, they could potentially have the facial recognition software connected to a criminal database)

Non-Corporeal (Is a spirit), Self-Sustenance (Types 1, 2, and 3), Immortality (Type 7 and 8; Is a ghost, and will only rest if the "Happiest Day" is achieved), limited Possession (Of inanimate objects; Comparable to the crying child in Golden Freddy and the Puppet), possibly Illusion Creation (Similar to the other crying children who seemed to be responsible for the changing walls and strange messages in FNaF 1)

Superhuman Physical Characteristics, Inorganic Physiology (Type 2), Stealth Mastery, Invisibility (via Cloaking), Illusion Creation or Teleportation via Fake-outs (If the animatronics do not decloak during charges, only their eyes appear and they vanish after reaching the player), Technology Manipulation (The player's phone produces static when hovering over the animatronic's location, Can cause the phone to glitch out temporarily (Interference), Haywires), Can be upgraded by feeding them Remnant, possibly Resistance to Electricity Manipulation (Via returning despite being shocked)

Attack Potency: Wall level (Capable of shoving a full-grown man into an animatronic suit with such force that it crushes his skull to the point that only his eyes and teeth survive. Can bite hard enough to crush a human skull) | Wall level (Can easily kill the protagonist, comparable to other UCN animatronics, who can damage skulls and rip humans apart) | Wall level (Was built to be as similar to the original as possible, Compares to Springtrap), Unknown via Firework

Lifting Strength: Peak Human (Can crush a grown man with sheer force. Should be comparable to Fredbear, who was able to crush a child's skull/upper torso with little effort) | Class 1 to Class 5 (Comparable to other animatronics who can tear the Player apart. This would include ripping the limbs, and likely the head, off the body) | Class 5 (Compares to Mangle and Springtrap who can tear The Player apart)

Weaknesses: Freddy can be tampered with and possibly reprogrammed, can only operate from midnight to 6 AM, and can be fooled by someone wearing a spare Freddy Fazbear head. He will normally refuse to harm children. Pulling on his bowtie will open his chest, leaving his wires and endoskeleton exposed and vulnerable. He is also vulnerable to heat-based attacks. | None notable | Produces more static, making it easier to track his location

The Hulk (The Incredible Hulk) The Hulk's Profile (Speed was equalized)

Retrieved from "https://vsbattles.fandom.com/wiki/Freddy_Fazbear?oldid=7008739"
Community content is available under CC-BY-SA unless otherwise noted.