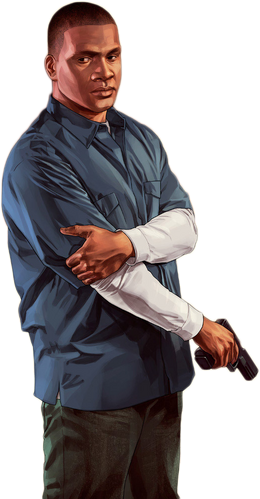 Franklin Clinton is one of the three protagonists in Grand Theft Auto V, along with Michael De Santa and Trevor Philips.

Tier: 9-B by himself, higher with melee weapons, firearms, and heavy weapons. At least 9-A with explosive weapons.

Powers and Abilities: Superhuman Physical Characteristics, Expert hand-to-hand combatant, Weapon Mastery (Can use any kind of melee weapon or firearm), Stealth Mastery, Vehicular Mastery, Enhanced Senses, Perception Manipulation and Speed Amplification with Driving Focus (He can heighten his senses to allows him to seemingly slow down time while driving any land vehicle), Regeneration (Mid-Low, can recover from vicious gun wounds without medical aid), Pressure Point Strikes (Can easily knock out enemies by striking their pressure points), Electricity Manipulation (via tasers), Explosion Manipulation (via several explosive weapons), Fire Manipulation (via molotovs)

Attack Potency: Wall level physically (Capable of knocking down people with a single punch, can one-shot armored police officers with a blow to the stomach. All the protagonists can keep hitting cars and even helicopters to the point where they suffer from severe deformation and mechanical damage, and can also kick them hard enough to shake them. Can shatter wooden doors and fences. Can fend off cougars, rottweilers and can easily beat them and cattle to death with his bare hands, including tiger sharks and killer whales if one can keep up with them. Can easily shatter bullet-resistant windshields with a few kicks and at times with a single stomp. Can send people flying several meters with his strikes, can trade blows with those capable of harming him. All the protagonists are capable of one-shotting each other in sheer anger), higher with melee weapons, firearms, and heavy weapons (Can quickly kill armored humans in one shot and blow up cars and trucks with ease). At least Small Building level with explosive weapons (Can destroy a tank with a few shots and easily blow up cargo jets in one shot. Capable of quickly destroying reinforced bank saves and blowing up heavily-armored cars and even construction equipment, as seen in the many heists he, Trevor and Michael took)

Speed: Peak Human with Subsonic+ combat speed and reactions (Can dodge RPG-7 missiles at close range just by side-stepping, and they can hit Mach 0.9), at least Subsonic+ under his special ability (When driving fast cars, can also increase the speed of the cars he's driving while using this ability. Views other fast-moving objects like planes and rocket launcher shots as slow). Subsonic with most vehicles and helicopters. Subsonic+ to Supersonic with most planes. Subsonic+ to Supersonic+ attack speed with most firearms

Lifting Strength: Peak Human (Can push back bodybuilders without significant effort, and is the fittest of the trio as he himself regularly engages in bodybuilding sessions and has a highly-muscular appearance)

Striking Strength: Wall Class (Capable of knocking down people with a single punch and smashing wooden doors. All the protagonists can dent metal and kill cattle and other wild animals like pumas and killer whales with a few hits. Capable of violently shaking gigantic military helicopters with his attacks)

Durability: Wall level (Has the same durability feats as the rest of the trio), higher with armors, Small Building level with a bomb suit.

Stamina: Very high (Can go on for hours in a fight without any issues). Nigh-Infinite by maxing out the stamina stat (Doing so grants Franklin infinite sprinting)

Standard Equipment: Pistol, and a massive arsenal of various other weapons

Intelligence: Above Average (Franklin is smart, rational, and calm, sometimes even showing higher intelligence than Michael and Trevor. He is also an exceptionally skilled driver behind the wheel of any land vehicle)

Weaknesses: Franklin lacks initiative and assertiveness when confronted by people who were more influential than he was, and as the youngest of the protagonist trio, he also lacks experience in the criminal world. The special ability only lasts for 30 seconds at most and its use is limited to vehicles.