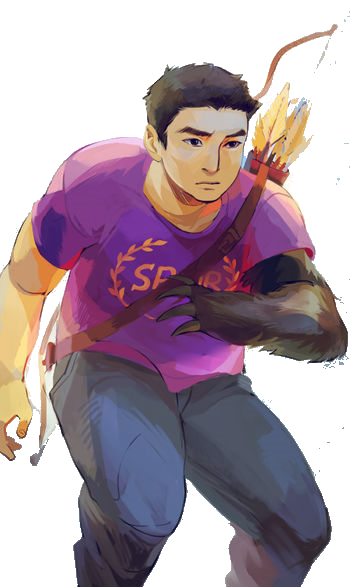 Frank Zhang is a major protagonist in the Heroes of Olympus and a minor supporting one in the Trials of Apollo. Frank Zhang is a Roman at Camp Jupiter, the demigod son of Mars, the Roman form of Ares. He is extremely skilled at archery since he has control over weapons. It is also assumed that he has ADHD and dyslexia.

Frank Zhang would later be one of the Seven demigods prophecized to defeat Gaia, and he also became a Praetor.

Attack Potency: Island level (One of the Seven. Defeated a whole team of trained Roman demigods. Defeated an army of monsters. Beat the giant Alcyoneus with Hazel’s help. Destroyed over a hundred of Katoblepones. Knocked out a giant. Overpowered a minor god and held him in a chokehold. Was claimed to be the physically strongest one in the Seven, though it is unknown if this statement is true or not.)

Speed: High Hypersonic+ (Comparable to Jason Grace and other members of the Seven. Matched multiple giants and minor gods in combat.)

Lifting Strength: Class E (Superior to the physically weaker members of the Seven and comparable to the likes of Percy Jackson and Jason Grace.)

Stamina: Very high (Should be comparable to other demigods.)

Weaknesses: As a demigod, he can be slain. Also he can eventually tire out.