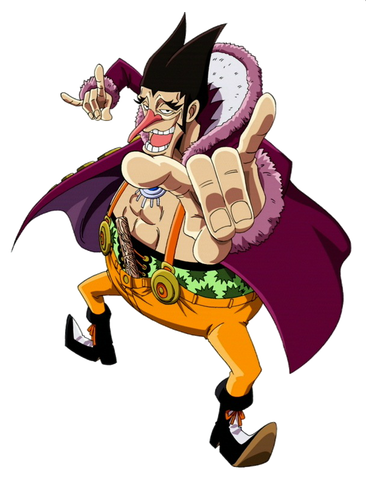 Foxy, also known as "The Silver Fox" is the captain of the Foxy Pirates and the main antagonist of the Long Ring Long Land Arc in One Piece. He is notorious for having one of the largest crews in the series, together with one of the largest ships. He has such because of his mastery of the "Davy Back Fight", a sportive event between pirates where crews wage their own crewmates. Although not very combat prone, Foxy is a very scheming and cunning man, making use of different kinds of weapons, disguises, and items, together with his Devil Fruit powers of the Slow-Slow Fruit (Noro Noro no Mi), which allows him to slow everything his beams touch for 30 seconds.

Powers and Abilities: Superhuman Physical Characteristics, Proficient Hand-to-Hand Combatant, Adept Gunslinger and Creation (Can use his Noro Noro powers to form a sword), Radiation Manipulation and Statistics Reduction (Ate the Noro Noro no Mi, a Paramecia-type Devil Fruit that endows him with the ability to emit noroma photons. Said photons slow anything they touch to a near standstill for thirty seconds), Limited Fire Manipulation (The Gorilla Puncher 13 can ignite the targets it touch), Limited Pseudo-Flight (He can use a glider while he uses his powers to levitate for a while), Limited Time Manipulation (His Noro Noro beams slow down the time of the target, like when Foxy stopped the time counter from many bombs)

Attack Potency: Town level (Traded blows with Luffy after the Skypiea Saga, but was inferior to him)

Stamina: High (He took many hits from Luffy during a heated combat)

Standard Equipment: Boxing gloves, a gun, a mirror racket to help him to deflect his beams, a glider and the Gorilla Puncher 13.

Intelligence: Above average (He's an experienced fighter and trickster)

Weaknesses: Standard Devil Fruit users weaknesses. Overconfident. He can be affected by his own Photons.

Noro Noro no Mi (Slow-Slow Fruit): A Paramecia-type Devil Fruit that allows the user to create and emit "Noroma Photons" which they can use to slow down anything for thirty seconds. Since Foxy ate this Devil Fruit, he gained this ability and is classified as a Slow Human. According to Foxy, Noroma Photons are not fully understood by science yet. When a person is hit by these beams and receives any number of strikes while in the slowed down state, the kinetic force of the strikes to them is released all at once when they return to their normal speed, making the attacks more damaging. 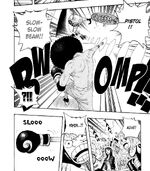 Note: Although Foxy's beams have been accepted to be at Lightspeed, the scaling from that hasn't been discussed yet.

Start a Discussion Discussions about Foxy (One Piece)