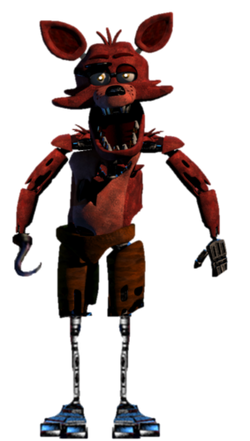 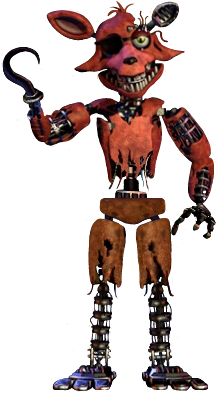 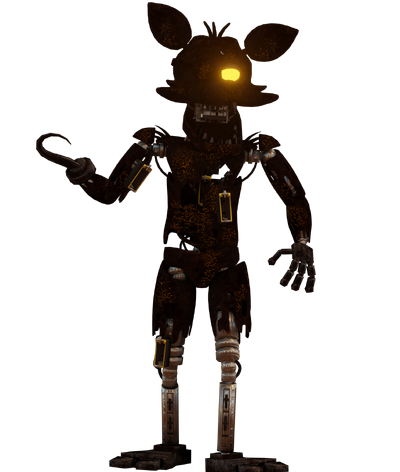 Foxy is an animatronic pirate fox as well as an antagonist in the Five Nights at Freddy's franchise. In the first game, his starting location is behind the curtain in Pirate Cove, from which he will emerge and sprint towards the Office to attack the night guard on any given night if he is not monitored enough, through the security camera. Unlike the other animatronics in the game, Foxy will hide for a while before coming to attack the night guard on the first night.

Superhuman Physical Characteristics, Natural Weaponry (with hook and teeth), Self-Sustenance (Types 1, 2 and 3), Immortality (Type 2), Inorganic Physiology (Type 1), Stealth Mastery, Berserk Mode (Goes into an aggressive state around adults, even to the point of overcoming their innate passivity during the day), possibly Information Analysis (As the original animatronics were retrofitted with some of the technology of the "Toy" animatronics, they could potentially have the facial recognition software connected to a criminal database)

Non-Corporeal (Is a spirit), Self-Sustenance (Types 1, 2, and 3), Immortality (Type 7 and 8; Is a ghost, and will only rest if the "Happiest Day" is achieved), limited Possession (Of inanimate objects; Comparable to the crying child in Golden Freddy and the Puppet), possibly Illusion Creation (Similar to the other crying children who seemed to be responsible for the changing walls and strange messages in FNaF 1)

Superhuman Physical Characteristics, Self-Sustenance (Types 1, 2, and 3), Immortality (Types 2, Pseudo 3, and 7), Natural Weaponry (with hook and teeth), Inorganic Physiology (Type 1), Stealth Mastery, Body Control and Pseudo-Regeneration (Mid, at most High-Mid; Can put self back together from ripping himself to pieces to fit under a door), Pain Resistance (Isn't harmed by ripping himself apart), possibly Enhanced Senses

Attack Potency: Wall level (Capable of shoving a full-grown man into an animatronic suit with such force that it crushes his skull to the point that only his eyes and teeth survive. Can bite hard enough to crush a human skull) | Wall level (Comparable to the other animatronics)

Lifting Strength: At least Peak Human (Can crush a grown man with sheer force) | Class 1 to Class 5 (Comparable to other animatronics who can tear the Player apart. This would include ripping the limbs, and likely the head, off the body)

Striking Strength: Wall level (Bangs a metal security door so hard that it drains power with each strike) | Wall Class

Durability: Wall level (Should be able to scale to Springtrap, who was able to survive the burning of Fazbear's Fright) | Wall level

Stamina: Extremely high, due to being a robot | High

Standard Equipment: None | None

Intelligence: At least average, due to being possessed by the ghost of a child | Unknown, likely Average (Should compare to the other animatronics)

Weaknesses: Foxy can easily be tampered with and/or reprogrammed, can be warded off with a flashlight, and can only operate from midnight to 6 AM. Foxy will normally refuse to harm anything that visually seems like a human child. He is also vulnerable to heat based attacks | None notable

Start a Discussion Discussions about Foxy (Five Nights at Freddy´s)