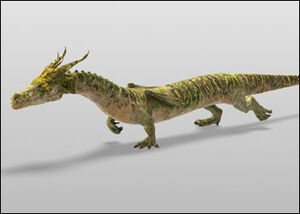 A evolved descendent of the Marine Dragon, the Forest Dragon keeps the long body of its ancestor. More is known about the Forest Dragon compared to the Marine Dragon, such as its main prey and its style of hunting. It is from the Chinese forests and was the basis for the oriental dragons of myth. Unlike all other dragons, it could mimic the sounds its hears by regulating the gas from its flight bladder. Due to its small wings, it couldn't fly, instead gliding or being light enough to move silently through the forest.

Origin: The Last Dragon (also known as "Dragons: A Fantasy Made Real" and "Dragon's World")

Powers and Abilities: Superhuman Physical Characteristics, Enhanced Senses (Smell and sight), Natural Weaponry (Claws and teeth), Vocal Mimicry (Used to lure prey), Stealth Mastery (Is able to move silently through the forest and surprise its prey), Natural Camouflage, Gliding (Unlike other dragons, all its small wings allow it to do is glide), Fire Breath (Can produce a powerful stream of fire using plutonium and specialized gases), Large Size (Type 0; Similar in size to the Marine Dragon)

Speed: Superhuman (Can catch up to tigers and boars)

Stamina: High (Comparable to its prey)

Intelligence: High Animalistic (Sneaks up on its prey, usually outsmarting them. Uses vocal mimicry to entice and trick potential food)

Weaknesses: If they run out of gas, they can't blow fire or mimic sounds.