The Forerunners are an ancient race whose Ecumene had encompassed three million worlds in the Milky Way galaxy, and for millennia had been the most powerful and advanced civilization in the galaxy, up until the invasion of the Flood, which led to a three century long conflict, after which the Forerunners, after having most of their Ecumene overrun by Flood infestation, activated the Halo Array, a group of seven superweapons that cleared the galaxy of all sentient life. The few Forerunners that survived the Halos' firing on the Ark went on to lead an effort to reseed life in the galaxy, after which they left the galaxy, leaving the Mantle they had upheld behind for humans to reclaim.

Long after their civilization's downfall, they are revered as gods by the Covenant, whom also base much of their technology from pieces of Forerunner technology.

Gender: Varies from Male to Female

Powers and Abilities: Advanced technology (creation of megastructures), Energy Weapons, Hardlight Weapons and technology, Biological Manipulation (Can rapidly devolve species and modify one's entire genetic structure), Telepathy, Telekinesis, Time Manipulation (Can make time-dilation chambers and make space-time warping technology), Life Wiping with Halo Arrays, Causality Manipulation (Their ships uses Causal Reconciliation technologies to automatically negate causal defects inherent of FTL travel), Information Manipulation (Boasts technology which is able to digitize life-forms and turn them into cybernetic constructs), Use Quantum Entanglement as a basis for supercomputers, Pocket Reality Manipulation (Can manipulate Slipspace to their liking), Limited Void Manipulation (Able to create complete vacuums of space-time and manipulate them to draw out background Vacuum Energy), Higher-Dimensional Scalar Manipulation via Clench Tactics (Can manipulate Scalars pertaining to higher-dimensional vectors to change the probabilities of any certain variable they deem necessary to change, allowing some certain event or advantage to materialize in non-linear or collinear ways in the middle of a battle and the ability to see all possible futures), Higher-Dimensional Manipulation (Were able to create hyperspherical barriers for their planet's defenses, could also manipulate hyper-dimensional branes, dynamic objects which can propagate through spacetime and numerous dimensions and manipulate Scalar Values that pertain to Higher Dimensional Vectors), black hole manipulation with conversion pods (Can exploit quantum fluctuations in surrounding space-time to capture and create primordial black holes), Reactive Evolution (Their armor can attune itself to better tank enemy attacks), Resistance to radiation, extreme temperature, high gravity environments, diseases, and the vacuum of space.

Attack Potency: Promethean Weapons range from Small Building level to Multi-City Block level (Weapons can casually pierce through ancient Human armor like a hot knife through butter, the Binary Rifle and Scattershot can vaporize spartans, and the Incineration Cannon can vaporize Hunters) | Moon level+ (The War Sphinx and Seeker are able to sweep continents and cities the size of continents) | Multi-Continent level to Star level with various ships (Some of the ships in their navy were equipped with a weapon which could cut off and lift a section of a planet's crust, overturn it, then drop it back down; the Mantle's Approach has a cannon which can buckle continents; they also had ships capable of inducing a stellar collapse in the event that the destruction of an entire planetary system was necessary) | Planet level to Large Star level with various megastructures and slipspace technologies (They were capable of constructing entire planets called "Shield Worlds" and moving them across the galaxy via slipspace; they could also lock them away from real space in a slipspace "bubble"; these shield worlds could reach sizes up to 2 AU. They also had constructs capable of manipulating stars and delaying supernovas and also those capable of inducing stars to go supernova)

Speed: At least Supersonic combat speeds and reactions (Forerunner suits are vastly more advanced than spartan armor and augmentations) | Ships have High Hypersonic to Massively Hypersonic speeds in atmosphere (The 14 kilometer long Forerunner Keyship can span its own length within the atmosphere in a second and the Didact's Cryptum can span a quarter of it's length every second), Massively Hypersonic+ to Sub-Relativistic Ship Speeds in outer space (Routine trips from Mars to Earth take a few hours, Forerunner Escort Ships can cross a few million kilometers in 30 minutes), and Slipspace Drives are Massively FTL+ (The Mantle's approach could cross several dozens of thousands of lightyears between Halo Installation 03 and Earth in around 2 minutes, an Escort Ship flew Iso-Didact 20,000 light years in 2 hours though it took 3 days due to problems with slispace, ships can fly across outside the galaxy for tens of thousands of light years in hours) | Massively FTL+ for Slipspace Portals (A Portal can let ships go hundreds of thousands of light years in hours, and other technologies can move across multiple dimensional planes simultaneously)

Range: Several meters for infantry weapons, Thousands of Kilometers with higher marked battle suits (Whole battles would cut across continents and be seen from outer space) | Low Multiversal for sensors (Forerunner Personal Armor can detect distortions and phenomena from other dimensions)

Intelligence: Exceptional (Far more advanced than present day UNSC and Covenant, capable of engineering structures on an astronomical scale (and casual planetary manipulation), quantum-scale technology, creating (See: Huragok) and devolving life, mold light into a solid state for a vast variety of purposes, creating fully sentient AIs (Ancilla), and coordinate their forces against the Flood, which in truth, are deformed versions of the Precursors) 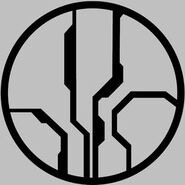 Forerunner symbol for the Mantle of Responsibility

A Male Forerunner (The Ur-Didact).

A Female Forerunner (The Librarian).

Forerunners glyphs that supposedly represent his numbering system, if correct, this means that they had a 7 numering system unlike our 10 system.

A Forerunner combat skin, as seen in Halo Legends.

Composed Prometheans, the Warriors that were encountered by the UNSC and Jul Mdama´s Covenant.

Biological Prometheans, the Servants and Workers of the Forerunners.
Add a photo to this gallery